Our post today comes from new contributor Dr. Kevin Gannon, who has his own excellent blog, The Tattooed Professor. This post was originally published November 14, 2015.

If you watch sports regularly, you’re probably familiar with the concept of “East Coast Bias.” Teams from places New York, Boston, and Washington, DC, can seem to dominate the coverage among sports media outlets, while West Coast teams, because their games are on so damn late for east-coasters, play second fiddle. The phenomenon was more pronounced before our internet-saturated age, back when we depended upon newspapers for the box scores and west coast games always finished after the papers went to press. But the bias lingers. This past season, ESPN’s Sunday Night Baseball featured the Yankees and Red Sox approximately 6,325 times–which was odd, given that the old and overpaid Red Sox stunk on ice, the staid Yankees were where fun goes to die, and the games were a 4+ hour death march through innumerable pitching changes and play stoppages. Yet, we are told, ratings dictated the matchup. These two sports markets love their teams, which to the rest of us seems like an incredibly sad cry for help.

East Coast bias is (mostly) harmless for sports fans (easy for me to say; the Yankees aren’t on TV right now). But what if all of our information and entertainment came from the narrow range of metropolitan enclaves hugging the Atlantic? How would we react to news programs that never covered stories east of Piscataway? Or an endless loop of sitcoms set in Roxbury? While high-culture snobs might welcome this development (If it didn’t happen in Manhattan, it didn’t happen at all), most of us would be decidedly nonplussed. Indeed, the scenarios I laid out above are absurd, despite how compelling the events in Piscataway might actually be. There’s simply no way that, in this age of instant connectivity and access to a vast array of everything, we’d settle for such a restricted, narrow, and laughably inadequate flow of information.

But when we consume, learn, and teach U.S. history, that’s exactly what we do.

Why does United States history, as it’s predominantly conceived and taught, start with the English colonies (or, in a marginal improvement, with European voyages of “discovery”)? Why does the narrative structure in which we embed US history unfold in an inflexibly east-to-west pattern? Why do we tend to describe the historical arc of the United States with words that connote an invariable process of motion, like rise and growth? Part of the answer, of course, is that we’ve always done it this way. From Frederick Jackson Turner’s assertion that the process of conquering a “frontier” that moved ever westward lay at the root of American democracy, to the post-Cold War paeans to national progress that seemed foreordained, popular approaches to US history have implicitly accepted the centrality of eastern seaboard colonial settlements in the American origin story. In doing so, they have echoed the denizens of those settlements themselves, who interpreted their presence in this new-to-them world as ordained by Providence and thus destined to succeed. John Winthrop’s mission statement for Massachusetts Bay–become a “city upon a hill” rising out of the American wilderness to become a beacon for all–differed from other English colonial self-justifications only in the degree of its piety. “American exceptionalism,” as currently worshiped by uncritical celebrants of an imagined American past, is merely the modern incarnation of this unabashed providentialism.

Practicing historians reading this are by now probably seething that I haven’t gone beyond these “popular histories” to discuss the more nuanced and accurate scholarly work that has challenged (and decisively repudiated) these simplistic assumptions. For example, Daniel Richter’s Facing East from Indian Country reverses the interpretive geography of early American history by challenging us to see America before the European arrivals and integrate that part of the story into our sense of historical context. For the Native peoples of the eastern seaboard, history didn’t start with Jamestown or Plymouth. Claudio Saunt’s West of the Revolution also problematizes the “East Coast bias” of Revolutionary-era historiography by analyzing the continental dimensions of 1776 and the Age of Revolutions. And these are just two notable examples. Scholars of Native American history, the Atlantic World, the Spanish and Mexican Frontiers, Canada, Borderlands history, and regions like the Mississippi Valley and Pacific Slope have all contributed to a de-centering of the English Atlantic colonies in the scholarly discourse surrounding early North America. And this is all to the good; indeed, it’s been one of the greatest periods of historiographical innovation in the history of our profession. 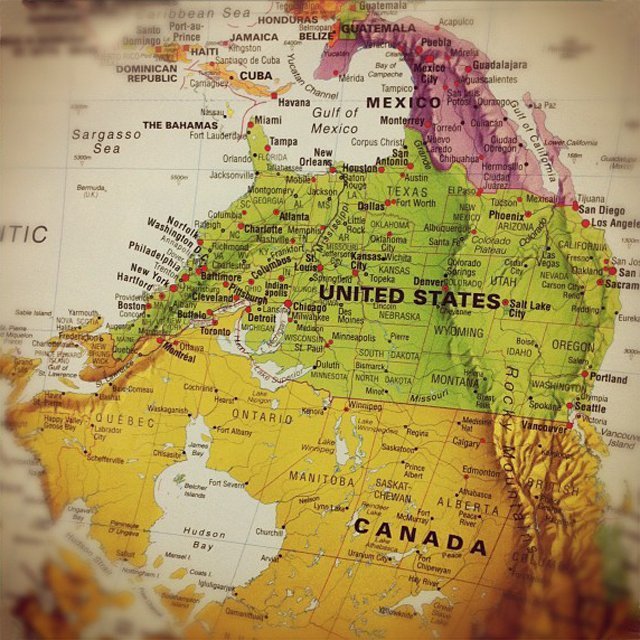 But none of it has fundamentally altered how US history is taught at the high school or college level. Individual classes that incorporate a continental perspective are exceptions that prove the larger rule. Take a look at all of the major US History textbooks on the market–their Tables of Contents are essentially interchangeable. There might be some vague recognition that scholars’ geographic lenses have widened, but it amounts to little more than a highlight box or a pull-out quote. The standard chapter on controversies and challenges in the English Colonies during the long eighteenth century might now have a featurette on the 1680 Pueblo Revolt (look it up; it was kind of a big deal), but it’s either a throwaway reference or a graphic set apart from the main text–as if to say, “this is a thing that is different and therefore incidental to the ‘real’ narrative we’re giving you in the text you’re not ignoring.” And the narrative arc of our textbooks has changed little since Turnerian days: start East, move West, divide the Union, reconstruct the Union, keep moving West, then overseas, and BOOM “Modern America” is here, emerging Athena-like from the “maturing” of “American society.” Sure, there are more diverse peoples and a less triumphalist tone in recent texts. Sure, textbooks are no longer (for the most part, alas) just empty celebrations of Great White Men and their foreordained triumph. But a more accurate cast of characters and a less celebratory analysis of their actions have not unseated the geographical myopia that has plagued our teaching and learning in US history since it became a subject of inquiry. The scholarly dialogue has, for whatever reason (and though there are many, I blame Texas), not made it into the places where most of the eyes and brains are focusing their attention: popular accounts and textbooks. As an author engaged in two textbook projects, both of which take a continental perspective, I am keenly aware of how little this interpretive framework is employed in the larger market.

This is more than just quibbling over how many times certain groups or events are mentioned. It’s more than just a call for equal opportunity for the Midwest or West Coast. The East Coast Bias that reigns unchallenged over both the popular and textbook–and thus a majority of classroom–accounts of US history is more than bad pedagogy. It’s dangerous.

Presenting US history as an inexorable movement westward–no matter what motives one ascribes to that movement–literally writes some people out of the narrative. Even if one is deeply sympathetic to the Cherokees, for example, accepting the standard geographical and chronological framework still renders them as acted upon instead of actors in their own right. They appear in the narrative just in time to become either the obstacles to “progress” that had to be removed, or the collateral damage of Jacksonian Indian policy. Either way, they only show up so that they can be removed; their presence on the land becomes ephemeral. But adopting a continental perspective would more accurately situate the Cherokee as the longtime occupants of a space that was home to a still-evolving set of economic and political networks, into which Euro-American migrants only lately intruded. This complexity, this agency, and this expanded temporal framework is absolutely vital to a mature understanding of the history of the lands that became the United States. And it isn’t in the textbooks.

The reasons for this type of omission point to the second danger of “East Coast bias”: it imprisons us in a nationalist framework of analysis without our even realizing it. If we approach US history as “the history of the United States as a distinct national entity,” we adopt all sorts of implicit assumptions about what is significant, what is historical–indeed, even what is human. US history only starts with Europeans arriving. Other areas only count when they become absorbed by subsequent generations of Euro-American settlers. Historical significance–our deigning to notice something–moves East to West. We may not see it, but we work from the same agenda that the most militant slaveholders, Indian-hunters, and xenophobes pursued. If we norm the “nation,” all else becomes abnormal. And textbooks don’t have space for what sits outside of the construct.

So we teach teleology, and not history. And in doing so, we condition students and the public of which they are a part to see some things as inherently normal–and thus good and proper and just–and other things as deviant. We inculcate an ethos by which expansion plus time equals progress. And the consequences are severe. We have a public that is unequipped to see violence against people of color as a product of US history–because “things were tough then, but we’re better now.” Time passed, slavery ended: Q.E.D. We have a discourse that sees every event as a distinctly unconnected phenomenon, divorced from context and violently ripped from the historical fabric. I didn’t own slaves. Don’t call me racist! And this discourse raises up solutions that ignore history, ridicule context, and blithely assume the best possible outcome because, well, America. (“We will be welcomed as liberators” only makes sense if you see it as part of this type of discourse.) An unimaginative and complacent approach to US history legitimizes an unimaginative and complacent discourse among US citizens.

So how do we bridge the gap between what scholars are doing and the popular and textbook discourses? I would start with reframing our narratives into a continental perspective. Instead of seeing US history as the history of a distinct national entity, we should see it as the history of spaces over which the US claimed sovereignty and into which people associated with this national project moved. We should eschew the default geographical orientation and start our inquiry in the West, or North, or South. The Atlantic seaboard is not the only area blessed with a chronology. The historical clock didn’t wait for Europeans to arrive at a particular place to start. As historians, we know this. But as pedagogues, we largely omit it.

Pedagogical research tells us that an effective way to get students to learn disciplinary content is to problematize and to complicate. We both activate and challenge their prior knowledge when we do so, and the resulting cognitive energy and focus can be a powerful tool for learning. We would do well to extend this principle into the larger public conversations that implicitly or explicitly depend upon historical analysis. Conceiving of US history as a continental phenomenon from the start, as opposed to something it eventually became after a series of westward movements, not only brings our best scholarly understanding into the foreground, but it creates a rhetorical and analytical space in which deeper understandings can take place. If we mean what we say about the intellectual and civic importance of teaching US history, we need to take up the challenge of continental history.

One thought on “Guest Post: An Argument for Continental History”