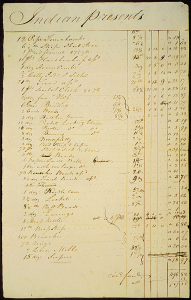 It’s good to be back from summer hiatus. Like many of you, over the summer months I devoted quite a bit of time to preparing courses for the fall semester. One of my courses this fall is a senior-level readings seminar devoted to the 19th Century American West, drawing on collections of primary sources, scholarly articles, and several monographs.

One of our early topics deals with exploration in the Early Republic, particularly Lewis and Clark’s 1804-1806 Corps of Discovery Expedition from St. Louis to the Pacific. This is well-trodden territory for most teachers of U.S. History, and it can be a bit of challenge to approach this subject in a way that is fresh or enlightening for students. However, I was determined to take up the challenge and try something new.

Rather than simply working our way through a straightforward account of the expedition, or drawing on L&C’s journals and observations, I decided to begin with an examination of Lewis and Clark’s Packing List. That isn’t to say that the historiography or the primary source accounts of the trip aren’t essential; they are. However, I thought it would be interesting to begin not with the who, where, when, and how  but instead to start with the material, objects, instruments, and other equipment that L&C considered important enough BEFORE their trip. In other words, I asked my students to ask themselves “Why did they take this or that item” and “What can that tell us about their interests, their concerns, their ways of thinking, and their priorities?”

This lead to some interesting conversations. What, for instance, is a “pewter penis syringe” and why did they bring four of them? Why bring 288 knives along? Why 144 “Small cheap looking Glasses”? Why, on a surveying expedition, did they only bring only one “Instrument for measuring made of tape with feet & inches mark’d on it” and what if they had dropped it in the Columbia River by accident? What does all this stuff tell us about their mission, their encounters with Native Americans, and so forth?

I think the experiment was a success; it certainly has provoked some spirited conversation and occasionally wild speculation. Have any of you tried a similar approach, working from lists, inventories, records and the like to spur conversation in your classes? How did it turn out?

One thought on “Finding Lewis and Clark”