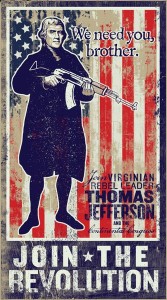 Recently, several casual conversations with some of my history majors have veered toward historical counterfactuals. Counterfactuals, or the fictional incarnation of the historical counterfactual, “alternate history,” posits a world in which one or more historical variables is different than the actual past. We’ve all played this game at some point, and undergraduates seem to love this exercise. What if Washington had failed to cross the Delaware River in 1776? What if Lee had won at Gettysburg? What if Teddy Roosevelt had not declared he wouldn’t seek another presidential term in the 1908 election?

As you can tell, counterfactuals tend to focus on battles, generals, and elections; the kinds of decisive turning points in history that we can isolate as variables and shoehorn into a formula. We know history doesn’t always (or even often) actually work that way, and that the past is complex, malleable, and often far from precise. That doesn’t stop students from trying it. So, the question that arises from this is: are counterfactuals of any use in a teaching environment? If counterfactuals excite and engage a segment of our students, shouldn’t we then at least consider whether and how to incorporate them into our teaching?

Political scientists, sociologists, and philosophers sometimes engage in a dense form of counterfactual theory that would likely send one of my average undergrads into a stupor (“The transitivity of causation fits with some of our explanatory practices. For example, historians wishing to explain some significant historical event will trace the explanation back through a number of causal links, concluding that the event at the beginning of the causal chain is responsible for the event being explained. On the other hand, a number of counter-examples have been presented which cast doubt on transitivity.”) Counterfactuals are also the territory of fantasy and science fiction authors, Hollywood screenwriters, and the feverish musings of entire online communities.

A potentially crippling problem with using counterfactuals as a pedagogical tool is that we may privilege “great men/women” history by placing inordinate importance on individuals, or that we emphasize events like wars and elections to the exclusion of more important, more subtle, or less comprehensible historical processes in play. Another problem is obvious; piling up inferences and tinkering with the past risks confusing students who are often still acquiring a basic understanding of what actually happened. Why confuse them by asking them to rethink history to favor a fictional account of the past?

There is potential for reward in counterfactuals, as well. These kinds of exercises seem like an easy and natural way to introduce history students to ideas like causation and contingency; concepts that are particularly valuable in demonstrating that the course of American history is anything but inevitable. Plus, students seem to think they’re fun.

With all that said, what do you think? Can we use counterfactuals in a useful way? If so, how might we go about it?