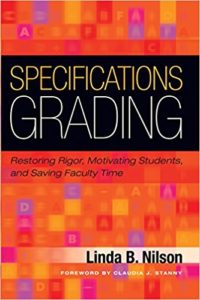 My university’s Center for Teaching and Learning has created reading groups in each of the university’s eight schools. The reading group for the School of Arts and Humanities has decided to read Linda B. Nilson’s Specifications Grading: Restoring Rigor, Motivating Students, and Saving Faculty Time (2015). Nilson proposes a grading system called specs grading that is based on a baseline measure of competency. Simply put, she proposes adopting the principles of pass-fail to every student assignment: Lay out clear expectations for what students ought to do and then measure whether the student met the expectations. If not, the students would be offered the chance to redo the assignment until they reach competency.

The rationale seemed compelling. We all complain about students who can’t write. Yet if we look at these same students transcripts, many of them have passed an introductory rhetoric or college writing course. Why are we allowing students to pass a class if they cannot achieve the basic competency in the content of that course? What does it say about the value of our educational institutions when employers see that their recent hires have earned passing grades in these courses and yet still require special training to perform at a basic professional level Building on the work of others, including most notably Richard Arum and Josipa Roska’s Academically Adrift: Limited Learning on College Campuses (2010), Nilson begins her work by complaining about a lack of rigor in higher education.
I was excited to participate and particularly excited to dig into the book. The subtitle, Restoring Rigor, Motivating Students, and Saving Faculty Time, promised a panacea for all my frustrations with grading: I worry extensively about grade inflation, passive student participation, and having my time swallowed up in grading. While I recognize the importance of all of these concerns, I am most worried about student learning, and my biggest drive as an instructor is to motivate students to become independent, lifelong learners. For me, this process involves encouraging students to consider their education as more than a series of checklists and instead see their classes as a playground or gym to explore and train themselves in modes of personal and intellectual growth. This entire process begins by encouraging students’ desire to learn. And with apologies to employers, I care more about achieving this goal than I do about having students achieve some sort of objective baseline competency. So I began considering Nilson’s specs grading by asking how this system would affect student learning, specifically student motivation.

Nilson recognizes that our students are stressed. She cites a 2013 study from the American College Health Association which found that “51% of students reported feeling overwhelming anxiety and almost 13% were diagnosed or treated by a professional for anxiety within the previous year.” It is hard to encourage a spirit of curiosity and intellectual play in students who are emotionally sinking. It is not a surprise then that specialists suggest that students do best when standards are high but stakes are low. For more on that see Ken Bain, What the Best College Teachers Do (2004) or José Antonio Bowen, Teaching Naked: How Moving Technology Out of Your College Classroom Will Improve Student Learning (2014). For this reason alone, I remain suspicious of specifications grading. When every assignment is reduced to pass-fail, it seems to that there is an inherent lowering of standards AND a raising of stakes. Moreover, I think meaningful distinctions exist between A work and C work. I’m not yet ready to surrender these distinctions in the pursuit of basic student competency.

I find it even harder to imagine applying specs grading to my current courses. I am once again teaching digital humanities classes, and my final assignment asks students to produce a work of original scholarship. Students are allowed to either write a research paper about the digital world or produce a digital product related to questions in the humanities. The assignment is simply to “make the world smarter,” either by creating new knowledge or by synthesizing and/or disseminating existing knowledge in a new way. I aggressively encourage my students to fail. Their instincts are often too humble — they start by thinking about what they know their skills will allow them to achieve, rather than imagining what they might be able to accomplish if they stretch themselves. I meet with each student once a week to support their work, and I encourage them to take risks. I can’t imagine how specifications grading would work with this intentionally “ill-structured” design or with the diversity of projects pursued in this interdisciplinary class.
While I will not be taking much from Nilson’s book, I am grateful for the invitation to think more critically about scholarship in teaching and learning. You can expect to hear more thoughts from me when we select our next reading.

One thought on “Encouraging students to fail”