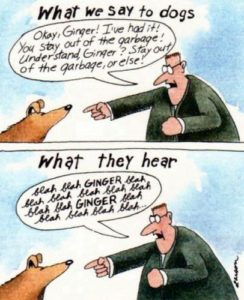 One of Gary Larson’s better-known Far Side cartoons features a dog owner scolding his pet, Ginger. In the first pane, the human shouts, “Okay, Ginger, I’ve had it! You stay out of the garbage! Understand Ginger?” The next pane illustrates what the canine hears: “blah blah GINGER blah blah blah blah GINGER.”

That’s funny, but what does it have to do with college-level reading of historical texts?

Well, imagine this scenario. It’s the end of class and you give a quick overview of what’s coming up: “For next time, don’t forget to read chapter three of the textbook, the article by Jones, and the two documents in your document reader.”

And what do the students likely hear? “Don’t forget to read blah blah blah…”

Why the disconnect, and why is this a problem? First, let’s look at things from your (the professor’s) perspective.

In reality, there’s an incredible amount of vital information encoded in your instructions. Read chapter three of the textbook. When you hear “textbook,” a number of key assumptions spring to mind. Importantly, it’s expressly written for an audience of college students. The focus is likely straight content delivery. There’s no metadiscourse, no hints of doubt or ambiguity. There’s effectively no author present at all, its story being told in what’s known as the “omniscient third-person.” A nod to “further readings” may appear at the end of a chapter, but it would be difficult, if not impossible, to ascertain the sources of information drawn upon. You may be using this text as a strawman, to be knocked down by the other readings assigned.

And what of the Jones article? When you hear “article,” what’s implicit? These texts are more advanced readings, reinforced by a scholarly apparatus allowing you to retrace the writer’s steps. The article isn’t written for college students but for other academics, so its vocabulary and methods are noticeably more advanced. Unlike the textbook, there are signs of an actual author here, who employs important discourse markers like “maybe,” “perhaps” and “possible” – indications that the subject embodies uncertainty and disagreement. Moreover, there’s an argument here: you assume students will identify it and test it against evidence in their other texts.

Next, there’s the documents. These are the fundamental building blocks upon which the previous two texts rest. The documents were written by people whose values and needs probably weren’t ours – indeed, the documents weren’t written for us at all. These texts may contain bits of important factual material, but you know that their importance lies more in what they seek to do than in what they say. Critically, the documents can’t be taken at face value. Authorship and setting are vitally important, as is cross-referencing the documents against the textbook and Jones article, thereby placing them in proper context. Like the article, you’ll use these documents to confirm or challenge other readings from the course.

Finally, the operative verb: to read. As the three previous paragraphs suggest, you know that texts are approached differently, depending on what they are. You further know that reading a text consists of more than simply making sense of its constituent words and sentences. “Reading” might mean a straightforward act to gain content knowledge. But it might also mean identifying agendas, watching for (in)consistency, deciphering subtext, placing in a broader framework, reflecting on prior knowledge – in other words, a whole host of activities, many of which are complicated and time-consuming.

Now, let’s look at the situation from the student’s perspective. He hears, Don’t forget to do the readings, and not much else. But that’s okay: “reading” is easy. After all, he’s been doing it for years. Textbook, Facebook post, historical document – it’s all words on a page or screen. Texts are texts, and the default mode – formed by years of education reinforcing the importance of basic content – is to assume the reading is factual and written for his benefit. Thus, “mastery” of a reading is a function of how much information is gleaned and memorized from it. Identifying a writer’s agenda? Must be a trick to that, and besides, the professor assigned it, so the reading must be valid. Cross-checking with other texts? Maybe, but that takes too much time and effort, especially if the instructor is just going to explain it all in class anyway – or perhaps not discuss the readings at all. The student learns quickly (and not irrationally) whether it’s worth it to do any more than skim the texts.

We see the effects of this in our classrooms: text-based discussions that go nowhere; false assumptions leading students down blind alleys; presentist judgments showing a lack of empathy; papers that are purely descriptive rather than analytical. To make matters worse, it’s the weakest students who are the most susceptible to underestimating the complexity of, and differences between, variant types of text. Steven Chew, a cognitive psychologist at Samford University, bluntly places this mindset – that learning should be quick and easy – under the rubric of “beliefs that make you stupid.”

Does it have to be this way? Is a divide between students’ and professors’ reading habits inevitable? In one sense, yes. Developing the skills to place texts into their proper categories, to verify their legitimacy, to see when an agenda lurks behind the words, to detect intra- and intertextual inconsistencies – these practices require not only many years to hone, but deliberate training as well. As I’ve written about previously, whereas experts perform these tasks unconsciously, students struggle with them as an “unnatural act.” Furthermore, undergraduates can be outright suspicious of the process itself, even when explicitly trained in it and acknowledging its utility.

Nevertheless, there’s hope: if we can provide user-friendly reading heuristics and ensure that students use them consistently, we can make a dent in their default mindsets about texts. Various models exist: just run a search for “reading primary sources” and you’ll get all sorts of advice, which you can then evaluate using your own expert reading skills. The point is to experiment, to find a user-friendly scheme that meets your needs, and to use it often and consistently throughout the course.

My current heuristic for primary sources is derived from the work of Sam Wineburg, who suggests breaking down the reading process into three main categories (sourcing, cross-checking, imagining the setting), further augmented with sub-questions under each. (To get this heuristic into students’ long-term memory, I’ve held classroom contests to see who can come up with the best mnemonic for the questions.) For secondary sources, I created my own question set based around examination of the author(s), the publisher, and the scholarly community’s reaction.

Having students complete these question sets as homework, or tasking groups with doing them in class, results in altogether different types of text-based conversations. Because the emphasis of the heuristics isn’t just on content, the level of discussion is decidedly more varied and advanced. Admittedly, some of the students are, in the parlance of Ken Bain, “strategic learners”: they go through the motions of completing the question sets because they must, but they have no intention of retaining what they’ve learned. Despite focused training, these students readily default back to uncontextualized, content-based observations – old habits are hard to break. Yet, with time and practice, others clearly get it: they spontaneously source their documents, they point out inconsistencies between scholars, and they begin speaking and writing in modes that signal their progression down a long and difficult path toward historical competence, if not outright expertise.

Gary Larson had it wrong: canine researchers have determined that the average dog understands about 165 words. With training, some have reached “vocabularies” exceeding 200. Far be it from me to equate students with four-legged animals, but there are two lessons here, nevertheless. First, students can learn to differentiate their texts, to read them in ways that approximate our own, and thus to understand the inherent complexity and wonderful possibilities of the past. But they won’t do it at all if we don’t ask them to, and they won’t do it well if we don’t give them the necessary tools. Second, never tell secrets around your dog. Ginger understands far more than you think!