Last summer, as I prepared to teach the Modern U.S. History survey, I decided that I wanted to double-down on fostering historical empathy after I read the AHA’s Tuning Project’s Discipline Profile and Core Concepts. Right away, the Tuning Project identifies that empathy is required for the study of history. In an item under the category of “Develop historical methods,” Tuning further suggests that students be able to “develop empathy toward people in the context of their distinctive historical moments.” The challenge was turning an admirable goal into something concrete.

My efforts to foster historical empathy began right away: on Day One in an activity titled “Sympathy and/or Empathy?” On a simple worksheet, I asked students to examine, with a partner or in a small group, the dictionary definitions of two words: sympathy and empathy. It’s likely that students are more familiar with sympathy, but the activity had them parse out the similarities and differences between the two terms. From there, the worksheet required students to reflect on their own views of the historical discipline. The second question asked students whether historians must sympathize with the historical actors they study. The last question then turned to the question of empathy. It asked whether “taking the other side” is enough to qualify as historical empathy. 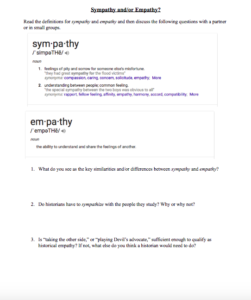 The activity provided an entry point for students to think about how they engage with the study of the past. My TA and I let students pair up, think, and share their own thoughts on the worksheet’s questions before we started to go around the room. Some students thought that the definitions were similar, but after some follow-up questioning, they saw some differences. In our whole group discussion, several students agreed that empathy was being able to put themselves in another’s shoes. Other students pointed out that this was, in their opinion, not much different from the second definition of sympathy: “understanding between people; common feeling.” These students wondered whether our more common use of sympathy — “to feel pity and feel sorrow for someone” — had made us lose sight of the other way we could sympathize.

Students also used terminology that has been employed in debates about researcher positionality. Objective and subjective were two such terms. Some students thought that the historian’s role was to write about people and events from the past on their own terms, divorcing themselves from the present. Others pushed back on this, insisting that this was impossible. Somehow, through a simple introductory activity, we had delved into some of the biggest questions of the historical discipline. I argue that this was possible, with fairly impressive student participation and engagement, because the opening day activity had put these issues in accessible terms.

We continued to focus on developing historical empathy throughout the rest of the course. 50% of the course grade was devoted to analyzing source material — 25% for two primary source analyses and another 25% for two analyses of academic articles. For their primary source analyses, students had to write meaty paragraphs on: who wrote the source; how the author’s own experience could have influenced what they wrote; and the author’s relationship to the audience. If applicable, students wrote about how factors such as class, race, religion, sex, gender, and/or sexuality contributed to the author’s perspective. For this assignment, students ended by listing the questions that the primary source raised for them. Oftentimes, students’ questions focused on issues of inequality and injustice, especially for sources written by racial minorities, women, and sexual- and gender-variant individuals. It was also common for students to write things like: “How could something like this still be happening today?” on this part of their primary source analyses.

The article analysis had similar types of questions. The first question asked students to write a paragraph about the article’s author(s). Much to my surprise (and joy), though, students really ran with the questions on sources. These challenged students to think about the types of evidence the scholar drew on to make their argument and to explain how other types of sources could have made the author’s argument stronger. On assignment after assignment, students wrote about how incorporating the experiences of someone else — maybe someone who didn’t fit the historian’s argument as neatly — could’ve showed more nuance. Students had not only thought deeply about the historical actors in the academic articles, but also positioned themselves as serious historians, offering insightful and constructive critiques of top-notch scholarship. This is, I think, one of the most important civics-related skills that students could learn in any history course.

“Sympathy and/or Empathy?” set the stage for a successful course, helping students understand that historians can be both empathetic and sympathetic. In a day and age as divided as our own, we need to continue to remind ourselves that others have different lived experiences from our own. Trying to understand where someone else comes from is not something that many people do on social media.[1] But, activities like “Sympathy and/or Empathy?” have the power to foster respectful conversations on political, social, and cultural issues that should draw the passion of an engaged citizenry.

[1] I am not contending that there are “two sides” to every story/issue here. Look for a future post on the problems of the “two sides” approach to the presentation, and study, of the past.