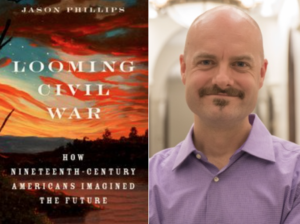 Looming Civil War explores how nineteenth-century Americans imagined the future, particularly the sectional crisis and Civil War, to understand how collective forecasts formed, spread, and made history. After researching a host of sources, including political speeches, economic predictions, sermons, literature, military records, music, diaries, private correspondence, and artifacts, I learned that two, competing temporalities framed how antebellum Americans approached the future and the impending conflict. Some people imagined themselves traveling through time, into a future ahead of them, and forging that future and their lives in the process. For these Americans, the future was open, opportunities abounded, and humanity made history. Their anticipations favored free will and progress. Other Americans imagined themselves stationary while time passed through them. This temporality understood life and history as a series of reactions to external events and invisible powers. Instead of imagining an open tomorrow fashioned by people, these Americans believed in a closed future already determined by impersonal or divine forces. These expectations privileged providence and fate.

Both temporalities framed how visionaries prophesied the Civil War, but progressive anticipations trumped fatalistic expectations in 1861, because they stirred passions and patriotism, resonated with new time-traveling technologies like the railroad, and inspired groups in both sections to spark a conflict that fulfilled their projects. The greatest blunder made by war hawks in 1861 wasn’t faith in a short, glorious war, but rather a mistaken belief that they could harness the Civil War to serve their ends. When the struggle expanded over time, individuals realized that its course, meaning, and outcome eluded everyone’s control. As this happened, fatalistic expectations replaced progressive anticipations as the dominant temporality and this shift fostered revivals in religion, pragmatism in the academy, and realism in arts and literature. In other words, the Civil War changed more than America’s future; it altered how Americans understood the future.

This argument challenges how the Civil War begins in historiography, textbooks, museum exhibits, and National Park sites. Most of these sources open the Civil War with an unquestioned myth that all Americans anticipated a short, glorious contest at the outset and rushed eagerly to war. While some segments of society exhibited this behavior, no monolithic forecast for the war existed. By promoting this short war myth, the conventional narrative of Civil War history ignores the dire warnings of conservatives, marginalizes the fears of women, and silences the hopes that millions of African Americans harbored for the conflict. While some Americans imagined a swift, romantic brothers’ war, others envisioned a frontier fight that would shape the course of America’s empire, a class conflict between free and slave labor, a racial war of extinction, an international revolution sparked by secession, and Armageddon ushering in the second coming of Jesus Christ. My book recovers these diverse prophecies of the Civil War and the heterogeneous temporalities that informed them. This approach allows for a more diverse, inclusive history that encompasses the complexities of antebellum America better and presents a more plausible story about how millions of people approached the Civil War.

Beyond changing how the Civil War begins in the U.S. survey and other courses (including mine!), this book’s insights into nineteenth-century temporalities shed light on a number of experiences that we explore in introductory and upper-level American history courses. Western expansion, slavery, immigration, religious revivals, economic panics, reform movements, utopian communes, railroads and telegraphs, evolution and geological time, all of these developments reflected and affected how Americans approached time and tomorrow. Upper level courses on American cultural, religious, or intellectual history would benefit from this book as well, because Looming Civil War reminds us that our subjects fixated on their futures as often as we worry and dream about ours, and it shows us how to access their futures and the diverse temporalities that framed them.

Each chapter of the book could be assigned separately, because they examine different visions of the war: western views of a frontier struggle in Chapter 1, speculations about class warfare in Chapter 2, fears of racial extermination in Chapter 3, prophecies of secession in Chapter 4, anticipations of revolution in Chapter 5, and expectations of death and destruction in Chapter 6. The first three chapters explain how temporalities developed over time during the antebellum era, whereas the last three chapters show how conflicting views of the future affected secession and war. If I had to recommend one chapter, it would be Chapter 4, because it helps readers understand how a militant secessionist, Edmund Ruffin, anticipated the war and prophesied his visions through propaganda and public action. Teachers could assign excerpts from Ruffin’s Anticipations of the Future (1860), an antebellum history of the Civil War that is available through Google Books, to interpret how a fire-eater prophesied the war before it happened. Ruffin’s forecast drew from many sources, including his family past, current events like John Brown’s raid on Harpers Ferry, and the Judeo-Christian prophetic tradition. As the future war unfolded in reality, Ruffin was present to enact actions, like firing the first shot at Fort Sumter, that he foretold in his book.

Chapter 4 also showcases two methodological lessons in Looming Civil War. First, it borrows from material culture studies to explain how people interpreted antebellum weapons as portents of the coming conflict. Specifically, it shows how Edmund Ruffin and other southerners assigned meanings to John Brown’s pikes, iron spears that abolitionists brought to Harpers Ferry to arm the slaves, to justify secession and civil war to defend the lives (and fortunes) of slaveholders. Antebellum prophets like Ruffin relied on relics of the impending war to substantiate their visions of the future and realize their projects. Second, the chapter explains how practicing the history of the future inverts memory scholarship. Like historical memories, collective forecasts are stories of another time that empower some at the expense of others. Historians’ retrospective bent privileges memories, but Ruffin’s anticipations suggest that forecasts may be more powerful, because they come first and precondition how societies experience and recall events.

Finally, writing this book has changed my approach in the classroom. Now I draw more attention to the aspirations, prospects, anxieties, and fantasies of past societies and ask my students to consider how those visions of futures past affected widespread perceptions and reactions to unfolding events. When interpreting primary sources, my classes work against the impulse to flatten past temporalities—the instinct to assume all of our subjects imagined time the same or shared our thoughts about it can be strong. But an enslaved woman understood time differently than her enslaver and approached the future differently than we do. Acknowledging those differences improves our ability to know our subjects and recovers a piece of their world.

One thought on “Teach My Book: Jason Phillips on The Looming Civil War: How Nineteenth Century Americans Imagined the Future”