Teaching United States History is excited to present Teach My Book, a series of posts where distinguished authors reflect on their work and how instructors might integrate their insights into the classroom. In this post, Ann M. Little, Professor of History at Colorado State University, explores how to teach The Many Captivities of Esther Wheelwright (Yale, 2016), winner of the 2018 Albert B. Corey Prize/Prix Corey. 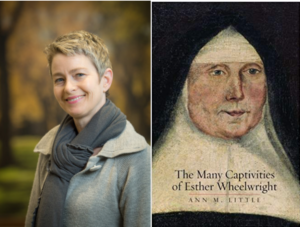 Although I’ve never taught my own books in my classes, those of you who know me online through my late, great blog Historiann or my Twitter presence @Historiann will not be surprised to hear that I have some opinions about how others might use my book in their classes.  I’ve always tried to cover several subfields of early American history in my books, Abraham in Arms:  War and Gender in Colonial New England, (Penn Press, 2007) and The Many Captivities of Esther Wheelwright (Yale, 2016; paper 2018)—women’s and gender history, Native American history, military history, age as a category of analysis, environmental history, material culture, and the histories of New England and New France.

I’ve had the pleasure of visiting in person and via videoconference a variety of different undergraduate and graduate classes that have assigned my book to discuss it with them.  This post is based on the conversations I’ve had with those students, and on a new handout I’ve been giving to my students at the beginning of the semester called “how to read an academic book.”

As I tell my students at the beginning of each semester, reading academic history is different from reading fiction, or even other non-fiction books for pleasure, because all academic history is engaged in sharing new knowledge and in making an argument.  The study of history is not just about conveying information about life in the past—although that is part of it.  College-level history courses are also about the arguments that professional historians have with one another and make in their books and articles—in other words, historiography.

Taking books seriously as material objects is one of the fastest ways I know of to get to know what a book is trying to accomplish:

In most chapters of Esther Wheelwright I featured images with analytical captions; most of these can be found online and several in color, so I would encourage you to find them (just do a search at images.google.com with a brief description from my captions) and show them to your students so they can see them larger and in living color.  You might ask your students what other points could be made in the captions, and ask them to write their own based on evidence from the text of the book.

Esther Wheelwright’s main argument is not terribly complicated:  WOMEN DID IMPORTANT THINGS IN EARLY AMERICAN HISTORY and WE NEED MORE EARLY AMERICAN WOMEN’S BIOGRAPHIES.  For this reason, my book is suitable even for introductory-level courses.  These are, of course, highly debatable propositions (much to my dismay, but they may make for some frisson in the classroom) and could elicit impassioned proponents on both sides.

Although the main arguments are not hard to find, each chapter has a number of sub-arguments about early American history and women’s history that could be fun to pick apart.  The first three chapters follow Esther from birth to age 15:  from her childhood in an Anglo-American colony, to life among the Norridgewock Wabanaki on the banks of the Kennebec River, to adolescence in a convent school in Québec.  They also delve deeply into the material culture and daily lives of the peoples of this contested borderlands, and make some provocative connections in the lives of girls and women across the three cultures.

The next three chapters follow Esther as she becomes a teenaged novice and then a choir nun and rises in leadership to become mother superior in the immediate wake of the British Conquest of Canada in 1759-60.  These chapters also speak to Catholicism in Ancien Régime Quebec, convent life, old age, the vexed relationship between women and authority, and the challenges of the conquest.  The final chapter is a brief narrative of her death at age 84, and of her memory in the convent in the century after her death.

As always, I’m happy to schedule an interview or Q&A session with your students if they read my book, or even just a single chapter.  I’m a happy warrior for my simple arguments (WOMEN DID IMPORTANT THINGS and MORE WOMEN’S BIOGRAPHIES PLEASE), so just let me know if you and your students would like to talk!  I can be reached via the email address on my Colorado State University web page.