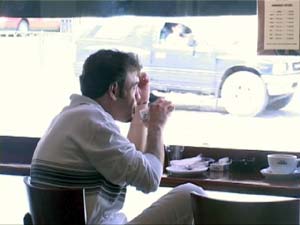 Assignments, part 1
Grading can be the worst part of the job. Maybe for a semester or two as a TA I enjoyed it. There was that rush of power. Sitting at a café with 60 bluebooks, I got to sit with an air of superiority. It nicely hid my overwhelming feeling of inferiority as a young graduate student. “Oh, c’mon Dave, you’re better than that,” I thought in response to that smart and talkative student who routinely neglected verbs in sentences. Or then later, “who is this person? Wow, she really got the material,” I remarked out loud when reading an essay from a student who has been so quiet that I didn’t even know who she was. But quickly, the joy faded. Grading came to feel like purgatory – not the hell of joblessness, but not the joy of discussion or lecturing.
Then I discovered TAs, but I don’t always get them. And this semester is one of those sad times.
I’ve tried a lot of different types of assessments. Students devised t-shirt designs to epitomize the Salem Witch Trials (“have any spectral spirit in you? … want some?” read one of the most overtly sexualized in an assignment that routinely moved from the spiritual to the sexual). I’ve tried advertising campaign assignments from the 1964 presidential election. One for Barry Goldwater against Lyndon Johnson was hilarious for its sarcastic untruth: “He kept us out of war.” A nice play on Woodrow Wilson’s earlier campaign and a striking contrast between Goldwater’s pro-war willingness and Johnson’s militaristic build up later in Vietnam.
I still have fun with those types of assignments, but include them primarily as extra credit or participation. I’ll post about them throughout the semester. For this term, I’ve got four arenas of assignments.

1. Essays (50% of total): the three-to-four page, double-spaced thesis-based essay has been standard in history classes probably since the days of William Dunning. I do not have students search for primary documents (that I do at the upper-level). Instead, the documents from Major Problems provide the fodder for primary analysis. Lecture, the textbook, and the secondary essays in Major Problems provide the context and some extra bits of evidence. My students write two essays during the semester that address these questions: “what was so depressing about the Great Depression?” and “what was wrong about the Civil Rights movements?” Both questions allow them to grab and pick from a variety of chapters and to formulate any number of answers. They can be social, cultural, political, or legal historians (or some combination). I’ve used other questions of this nature, such as “was Reconstruction a success?” and “how gilded was the Gilded Age?” and “who would you have voted for in 1980?”