Documents and Discussions, 1945-1965
The class was all set up. I had asked them to imagine life when they were in fifth grade. “Who was your teacher?” “Mrs. Anderson,” one responded. “Who was your best friend?” A host of names were mumbled. What did your desk look like? When was recess? And then, I put Bert the Turtle on the screen, preparing to smile and then shudder as we watched him teach children of the 1950s how to “duck and cover.” But it didn’t work. No sound was coming from the speaker. I fiddled with it for a second, and then Becca (who had earlier showed us her new tattoo on her hand) blurted out, “Well that’s disappointing.” “Yeah it is,” I sighed.
So it would have to be Thursday that I would show Bert the Turtle, along with several other short videos from the 1950s. What I gained from that little moment, though, was how powerful setting up the stage was for the film. The little questions about life as a child seemed to prepare the mood of the classroom to watch the video not as a joke, but as a real gesture of how it must have felt to watch a video that explained what to do if mommy, daddy, and teachers weren’t around. 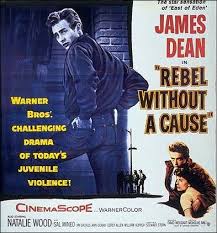 Today, we’re going to discuss a few videos from the 1950s and some of the documents in Major Problems. I may even through in some comics, a la Hist and its inclusion of Captain America in these years. My favorite video – beyond Bert the Turtle – is the trailer for Rebel Without a Cause. Movie trailers are great: they provide a lead in for discussing an entire film (and I’ve tried showing entire movies before, but they eat up so much time) and the marketing of the trailer may give us some historical insight. For instance, for Rebel Without a Cause claims that its story “daringly meets the challenge of today’s most vital controversy!” Rebel without a Cause was released in 1955. Umm … the most vital controversy?!? Wouldn’t Brown v. the Board of Education and the NAACP’s challenge that school segregation violated the Equal Protection Clause of the 14th Amendment be more explosive? What about the possibilities of the USSR and the USA annihilating themselves and the world with atomic weaponry? But then again, as the trailer continues, the film is “sensitive … so sensitive.” It’s hard to not roll with laughter. So I ask my students to try and explain how this movie could be considered for many Americans to speak to their deepest problems. Then we compare it with what the national news today may say is most important versus what those in the class worry and fret about on a daily basis.
Major Problems has three chapters that deal with the span from 1945 to 1965. One is on the Cold War and nuclear weapons; another is on affluence and anxiety; and the third is on civil rights. Together, they approach the two decades from a variety of interesting and provocative angles. There are images of destruction – whether a cake shaped like an atomic mushroom cloud or Godzilla destroying a city; there’s Senator Joseph McCarthy spewing about the internal communist menace, and then Life reasoning that “We Won’t All be Dead” in the event of a nuclear war (which was about as reassuring as Bert the Turtle!). A newspaper survey from 1959 evaluates whether you are a “conformist or a rebel” and a photograph from a Star Trek episode offers a glimpse of multiracial America.

In class today, I’m going to highlight documents on a postal clerk who lost his job, the newspaper survey on conformity, and the Supreme Court ruling on Brown v. the Board of Education. Each of these documents engages my students with where they are: they’re students who deal with issues of individuality versus conformity, and they’re all terrified of employment issues (not so much losing a job as getting one). It’s all well and good to be a rebel when you don’t have to worry about employment; and it’s all well and good to be in favor of desegregation when you put the burden onto children. We’ll see how it goes!

18 thoughts on “Rebel with an Equal Protection Clause”