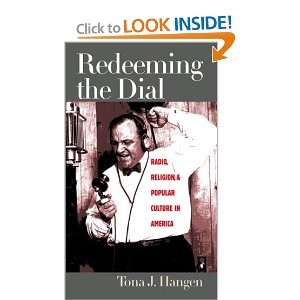 Today’s entry comes from guest blogger Tona Hangen of Worcester State University. Professor Hangen is the author of Redeeming the Dial: Radio, Religion, and Popular Culture in America. She also blogs over at Juvenile Instructor – one of our favorite blogs. Tush.0 has offered her a lucrative contract to join the editorial team here, and we’ll see if the 80% share of the gross we offered will be enticing enough.

We used to split our US survey three ways: to 1865, 1865-1945, and 1945-present. To reduce our dependence on 100-level requirements and to squeeze in a history methods course without adding credits to the major, and for parity with transfer courses elsewhere, in 2010 we started teaching a 2-part survey that divides at Reconstruction. Some of us in the department made substantial efforts to try to bring the new US II course up to the present, while others decided to teach it pretty much the same as they always had, figuring that it was more important to teach deeply than to race through in a mad dash to the Obama administration. I can see the value of both perspectives, although it must annoy the heck out of students that there’s not consistency in our collective approach.

I taught the “new” survey for a couple of semesters and it felt (to me) shallow and frantic, trying to cram everything in with a lot less time for reflection or review. I decided something had to give.

For one semester I tried varying the pace throughout the course, alternating between “sprinting” and “digging down” but honestly, I think my students wouldn’t have been able to tell the difference–it probably felt equally speedy to them. The next time around, I decided to give my students more say in what we “dug down” into. I split the course into broad temporal units and wrote a syllabus that left some gaps in what the specific reading assignments would be for each unit. I then came up with 5 themes or topics I’d be willing to teach for each unit, and presented them to the students in the first week of class for a vote.

Once they’d voted, I updated the syllabus with the textbook sections appropriate for those topics. The unchosen topics became reading for students to do on their own, assessed with (open book) online quizzes. We seldom discussed those topics in class, focusing instead on the ones that students preferred to learn about.

There was definitely a military history emphasis to that class… in fact, it felt a little History-Channelish, with all those wars. Very thin on social history.

This past semester’s ballot looked like this (I had periodized it a little differently) – click to enlarge:

The voting results: Rise of the City (late 19th century), Why the Twenties Roared (Progressive Era), Great Depression (1930-1950), TV and Culture of the ‘50s (Cold War Era), Vietnam Hawks and Doves (the 1960s), America Since 9/11 (History in Our Time) – so this one definitely had a cultural studies/pop culture emphasis. 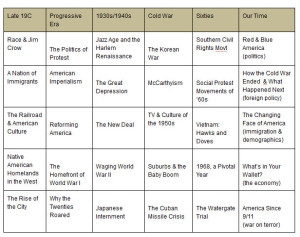 You may already be able to see that there are pros and cons to this approach. For one thing, this only really works if you’re teaching one section of the survey. I wouldn’t be able to maintain all that variety over multiple sections. We sacrifice breadth and skip a lot. We learn some things well, and other things only lightly or not at all. I do find that students tend to test well and retain what they learn more deeply. And based on their comments, they seem to like having some control and stake in the course content. It keeps the survey really fresh for me, since I am essentially teaching a different course each time based on the combination of choices.

However, there are some topics I think will never get chosen, no matter how attractive my titles for them might be or how important I think they are to understanding the 19th and 20th centuries. And some students, in their course comments, really miss not talking about huge chunks of the book. On the other hand, this probably ends up being a more realistic approach to digesting textbook material – few students will want to read the entire thing with equal fervor.

For fall term this year, I’m reinventing the course again. I’ll still have students vote, but this time on thematic “lenses” with which to look at the time periods. Each time period will get one lens, out of the five choices in column 1. One afternoon just after classes ended, I sat down and composed a matrix so I’d have a plan in case any lens was chosen for any period. It looks like this: 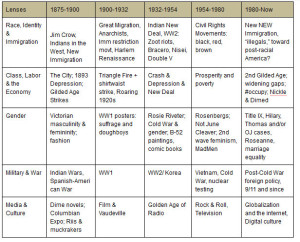 Each unit will contain a primary source “workshop day,” a writing assignment, and a 2-part exam: an online at-home quiz using the textbook on the material not covered in class, and an in-class written exam on the material and concepts we dealt with in class.

What do you think of having students select some of the course material or giving some control over the syllabus design to a vote? Have you organized a survey course around student inquiry or curiosity (i.e. “what do you want to know”) instead of a more traditional canon-based “here’s what you need to know”? Would this model work in larger classes or across multiple sections? How do you strike the balance between “getting through the textbook” and focusing on real learning in an intro course?

6 thoughts on “Syllabus By Consent?”