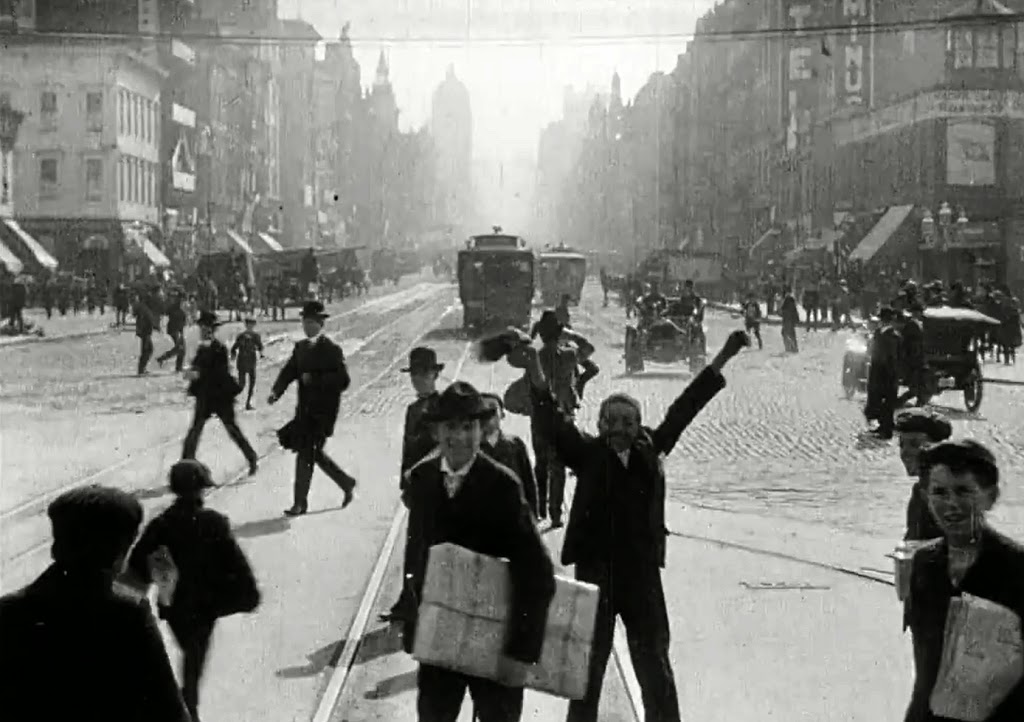 It feels like ages since Jonathan Rees wrote about YouTube in the AHA’s Perspectives and felt compelled to address the question, “Isn’t YouTube for Teenagers?” (here and, revisiting the topic in 2011, here). It’s no longer particularly radical or innovative to integrate clips from YouTube, Vimeo, or other online video resources into lectures and discussions: it’s now utterly normal.

But what to use? There are standardized narratives and texts and topics commonly used in American history surveys, but there doesn’t seem to be much of a “canon” when it comes to video resources: it’s everyone for themselves. It’s still a struggle, for instance, to visualize early America, or difficult topics that draw few viewers and therefore few videos.

In the spirit of collaboration, what clips are you showing in your classes? If you have old standbys, give a title, a link, and a brief explanation in the comments.

In the meantime, I’ll share a few of my favorites from two units of the second half of the survey and offer brief rationales and descriptions. My criteria for turning to YouTube are simple: to humanize subjects, offer a visual immersion into the material, explain a difficult subject, or simply pull students more fully into the material.

The late-nineteenth and early-twentieth centuries offer the first great moment when film captures history. The Library of Congress has a number of early recordings available on their website and on YouTube, several of which capture the era’s pulsing energy.

Lower Broadway
http://youtu.be/G535zKtc5_Q
Arrival of immigrants, Ellis Island
http://youtu.be/pzHeOH7h52c
Assembling a Generator, Westinghouse Works
(Perhaps best watched while reciting Henry Adams’ Prayer to the Dynamo?)
http://youtu.be/0HPcXc-zjy0
Panorama View Street Car Motor Room
http://youtu.be/4pLSfpk9m5E
New York City “ghetto” fish market
http://youtu.be/haKhhVCqr-o
The absolute most impressive instance of this genre, though, is a restored, high-definition film of a ten-minute trip down San Francisco’s Market Street. The quality of the recording, the energy of the people, and the rich immersion into a world transitioning to automobiles is what sets this film apart (as does the knowledge that in mere days the 1906 San Francisco earthquake would ravage the city).
A Trip Down Market Street (1906) (HD)
http://youtu.be/I57Fhe89s_g
In a large introductory lecture, sometimes the best clips can be used simply to show that these people were human beings, that they weren’t merely the dour-faced subjects of early American photography or the always-struggling citizens of popular causes, but, for whatever else, also fun-loving, humorous, and light-hearted.
The Boxing Cats
http://youtu.be/6qre61opE_g
May Irwin Kiss
http://youtu.be/Q690-IexNB4
What happened on Twenty-third Street, New York City
http://youtu.be/mDJCCr2-Sso
Kodak 1922 Kodachrome Film Test
http://youtu.be/J_RTnd3Smy8
The Sixties Counterculture & the Counter-Counterculture
Partly a self-indulgent diversion, it’s also never enough to simply talk about the counterculture: it has to be seen and heard. I first try to show how ideological and cultural protest begin crystallizing among both universities and youthful concert-goers.
Mario Savio on the operation of the machine
http://youtu.be/PhFvZRT7Ds0
The Beatles – She Loves You (Live at The Washington Coliseum) (HD)
http://youtu.be/AcUoQWgSrTU
Dylan’s later evasiveness and his utter derision of the middlebrow hits you over the head.
Bob Dylan Interview with Time Magazine
http://youtu.be/mnl5X5MQKTg
A Woodstock clip hits a topic that a lot of students are familiar with, but Country Joe McDonald’s piece also captures the unique collision of seemingly empty vulgarity with pulsing anti-war sentiment, a deep cynicism and yet a very real sense that youth could “stop the war.” (It also helpfully reminds students that 60s-youth didn’t dress as ridiculously as popular culture seems to remember.)
Country Joe McDonald – Feel Like i’m Fixing to Die Rag – Woodstock ’69
http://youtu.be/hs4s7LrAuMo
But the counterculture didn’t rule the sixties. The next two clips, especially when put against against the preceding, capture the very real energy waiting to be harnessed by someone on the right.
Barry Goldwater 1964 Campaign Film, “Choice”: Sleaze Montage
http://youtu.be/VLb-F8sm3k4
Ballad of the Green Berets – [HD] – – – SSGT Barry SADLER
http://youtu.be/m5WJJVSE_BE

So what do you use? Offer your old standbys in the comments below!

2 thoughts on “Open Thread: What Clips Do You Use in Class?”