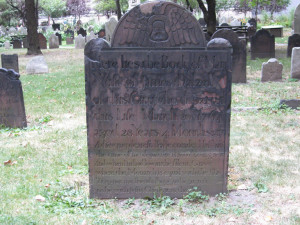 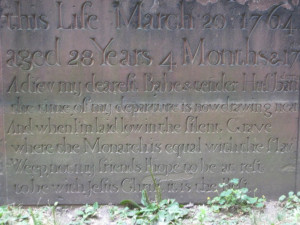 Mary Dalzell died in 1764 and was buried in Trinity Church in Lower Manhattan, the same cemetery where Albert Gallatin and Alexander Hamilton are buried. But unlike these more illustrious historical figures, she left behind no voluminous collection of papers, and no detailed accounts of her life exist. What we know about Mary Dalzell comes from her gravestone, a poem describing in brief who she was, and how she lived. It reads:

Here lies the Body of Mary

Of this City, who departed

the time of my departure is now drawing near

And when I’m laid low in the silent Grave

Where the Monarch is equal with the slave

Weep not my friends I hope to be at rest

to be with Jesus Christ it is the Best.

I used this gravestone to introduce students in one of my junior-senior level courses on eighteenth century America to primary sources, and to demonstrate to them how much attention to detail I expected from their analyses. This was one of those classes that was a combination of lecture and discussion. Mondays and Wednesdays I’d lecture, Fridays we’d discuss assigned readings. One of the most frustrating aspects of leading discussion—one my spouse, who is also a historian, most clearly articulated to me some time ago, and one experienced, I’m sure, by every contributor to and reader of this blog—is students’ inability to analyze sources in detail. Certainly there will always be students who don’t even attempt to do the readings, or who barely skim the assignments with no intention of doing more than the bare minimum. But when even earnest students struggle with this, as they often do in the classes I’ve taught, their shortcoming can’t be blamed on effort alone. It occurred to me that in the courses I took as an undergrad, and even the courses I TAed, no professor ever actually walked students through the process of examining sources in detail.  I concluded that the problem was that my students simply didn’t know how to do what I expected them to do. So I took a single, short primary source—Mary Dalzell’s gravestone epitaph—and had us, as a class, craft a mini-biography of her life.

When I walked them through the gravestone, I found that, with a little prompting, students could grasp the clues offered by the epitaph and situate it within the historical context to produce a short biographical sketch. They quickly deduced that she was Christian, that she was a wife and perhaps a mother (students had a surprisingly lively discussion about whether “Babe” was an affectionate term for her husband, or, more likely, a reference to a child), and even that she died right on the eve of the American Revolution.

Nor did they pick up on the ways Mary Dalzell’s gravestone epitaph also illustrates the entrenched inequality (especially gender inequality) that belied such a revolutionary political prospect. Her gravestone first announces: “Here lies the Body of Mary Wife of James Dalzell,” offering a reminder of the power of couverture and the disappearance of a woman’s very political and social identity beneath that of her husband. The likelihood that someone else wrote the epitaph only further underscores this. The epitaph is written as though Mary Dalzell is speaking to her family. But it is likely the epitaph is an exercise in attribution rather than in direct quotation or paraphrase of something Mary Dalzell actually wrote or said. In this case, the power inequality is even more stark. Even in death, Mary probably didn’t get the last word, and the only sentiments that carry centuries into the future are likely someone else’s, imposed upon Mary for eternity.

It took some prodding to get them to see this (I didn’t just come right out and tell them), but once they picked up on it, a truly remarkable class discussion ensued over what Mary Dalzell’s life can teach us about the time in which she lived. They began to understand that primary sources can’t always be taken at face value, and that they invariably reflect tensions, contradictions, and uncertainties that pervaded the time in which they were created. Students still struggled at times throughout the semester with assignments. But this introductory class assignment helped them understand what to look for when they read. This suggested to me that I should do more assignments like this one: focus on a single source and really focus on analyzing it in some depth, rather than devote classroom time to a much more superficial discussion of a multitude of sources. The depth of our discussion was much better, and the lessons students came away with more substantive.