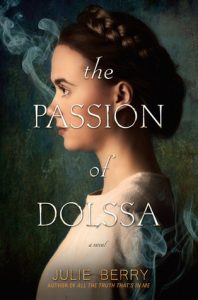 Interdisciplinarity is a popular yet challenging idea in higher education. For all the important attention it receives, actually bringing different fields together in the classroom can be much harder than it looks. But research with primary materials, be it in a library, digital database, field site or laboratory, is something that, regardless of our disciplines, most teachers need to address. Following up from my post last month, Julie Berry graciously agreed to talk with me on the role of research in the relationship between literature and history. [i] In our conversation, Berry raised several points that may come in handy to history professors when trying to connect their materials to a wide range of students, each with their own unique backgrounds and perspectives. In particular, Berry and I spoke on the dual necessities of appreciation and skepticism, skills that are essential for our students to process information, both inside and outside of the academic world.

To start off, I asked Berry about what hooked her into historical fiction as a hybrid genre. While The Passion of Dolssa is Berry’s first historical novel, history has been key to several of her books, frequently set in the eighteenth and late nineteenth centuries in Europe and the United States.[i] She notes, “I’ve been developing my skills and sniffing out history and researching and trying to world build as meticulously as possible with social history – I pay attention to maps, I pay attention to timelines, I try to find all the authentic sources I can. I feel so lucky to live in the age of google books because I try to find sources that were published at that time.” Berry draws on materials like contemporary colonial and Victorian magazines and cookbooks to develop her narratives, all the while paying attention to political and economic details like coinage and weaponry.

In Dolssa, Berry juggles four different timelines: 2014, 1290, 1267, and 1241. The first three are relatively close but they each have a different chronological and geographic vantage, with a narrator in each of those moments who is either officially or unofficially serving as a type of historian. I asked Berry: how do you see the historian’s role staying the same or changing across these distinct moments? “What I’m trying to do, and I think it adds narrative interest to the book,” Berry begins, “is showcase both the vital debt that we owe to historians of every kind, every approach: we can say that Botille, a story teller historian, is quite a different animal from Friar Arnault, compiling his records, or ‘the author,’ translating records in 2014. Each is coming at history with a different set of beliefs and attitudes, qualifications, training, knowledge, and each brings their personality, you might say, and their fundamental beliefs to their creation of history, of a historical narrative. So I think that creates interest because we can see how indebted we are to each of these types of historians.” Yet Berry cautions, “I also I think it allows the opportunity to raise a question of how fully can we trust any of these historians, where should we begin to be skeptical of their biases, their intentions, their motives, their limitations.” This is not to say, as Berry reiterates, that they should be ignored, but rather that it “mirrors the process” she went through researching Dolssa.

This process, Berry notes, was not an easy one. Berry spent a year studying the “Cathars,” which conventional wisdom (easily found in any Cambridge History or Oxford Handbook) says are the most famous heretics of the Middle Ages. The heartland of “Catharism” was supposedly what is now southern France and the Albigensian Crusade (1208-1229) and the inquisitions into heretical depravity after 1233 were undertaken by the Catholic Church to eliminate this heresy. “After a while of reading lots of different sources,” Berry describes becoming “unsettled by things that just didn’t fit. There were enough irreconcilable differences of detail and interpretation that I began to think something was wrong and wonder if I knew anything at all!” This set her on the path of tracking down one of the most respected scholars of the period that one could “safely place your confidence in. “ Studying the acknowledgement sections of a plethora of secondary texts (sound familiar, dissertating graduate students?), Berry found her way to Mark Gregory Pegg.

A historian at Washington University, Pegg worked with Berry on the primary sources regarding heresy and the Church in twelfth and thirteenth-century Latin Christendom.[i] Pegg’s paradigm-shattering research, drawn largely from a close examination of actual inquisitorial transcripts during the early thirteenth century, debunked the Cathar myth entirely, arguing that there was neither Catharism nor any other organized alternate religion (by whatever name) in southern France (or Latin Christendom generally) at the time. Indeed, the word “Cathar” does not appear anywhere in any text, especially inquisition records, in southern France. Rather, the victims of inquisitorial scrutiny and oppression were “the good men and the good women.”  Catharism is an invention of late nineteenth-century historians and scholars of religion with little or no relation to medieval reality, argues Pegg. This does not mean that men, women, and children were not persecuted by the inquisition, far from it, but they were not Cathars and they were not part of a “counter-Church.” Dolssa, and the good men and good women portrayed in the novel, while fictional characters, are actually closer to the historical “truth” regarding individuals hunted by inquisitors, Pegg believes, than the enduring fiction of Catharism.

Drawing on this point of historical responsibility and where fiction fits, Pegg notes that “historical fiction stresses a methodical point for me, at least as a medievalist, which is that historians should try and evoke a past world as fully as possible, with an anthropological depth that was once aspired to in the 1960s and 1970s, if rarely achieved.” Echoing Berry’s concern about over-reliance on one specific lens or narrative, Pegg points out how “the old nineteenth-century notion that if we just find one text, one smoking gun, then everything we instinctively know to be true will be proven” can be “replaced by a broader understanding that if a past world is evoked as fully as possible, with historical and anthropological depth, where ideas and society entrench each other, then this evocation itself functions as the smoking gun, proving many things at once, giving sense to fragmentary texts, giving meaning to evidence never noticed before, revealing consequential relationships between beliefs and habits.”  Wary of narratives created for a specific agenda, Berry had to “ unlearn all that [she] had learned and reapproach the book from an entirely different vantage point.” And it was at that moment that the figure of a historian began to take a “vital” place in Berry’s novel.

The archive is at once a powerful metaphor and literal repository in Dolssa, which Berry explained was deliberate. To be sure, as Pegg warns, the concept of the archive can be a “clumsy” one, as a “1980s postmodern term simply meaning the primary sources that all historians rely upon in writing history.” But, he also adds, the “enduring thing it made historians aware of… is how we write is as important as what we say” and “historical fiction helps emphasise this point.” With this in mind, Berry came to feel during the writing process that “the novel would be so much stronger if there was a plausible reason that these very disparate voices,” – the several characters who act in their own way as historians – “somehow melded together.” The archive was the “obvious solution” because the church had so many “obsessive record keepers.” This systematized dedication provided Berry with the “perfect frame.” “The element of the archive,” Berry describes, “forced to me to make the story darker, more true, and more painful than I first wanted it to be.” The archive as a “motif, a container, a supporting structure,” brought the story to the place it needed to be.

As Berry points out, the historians in Dolssa are for the most part very different than the professional association we have today. But while writers generally appreciate any authentic sources we can get our hands out, a healthy douse of doubt is also necessary when confronting archival material – what is the context, I constantly remind my students. This is absolutely in no way to advocate the pitfall of not taking your sources seriously or “believing” them, per say, but to better understand why they are putting forth a particular narrative. Doubt is a major theme in Dolssa – the main antagonist even questions his actions by the end – so I asked Berry to discuss how it works as both a narrative and teaching tool. Astutely, Berry notes that there are many types of doubt when it comes to sources – religious doubt, factual doubt, personal doubt – and that first and foremost, her goal is to craft a story that keeps her readers up all night! Yet the “underlying subjectivity of any one persons certainty” inspired Berry to craft a novel that is primarily “a story about the characters living their lives ” but also has “a subtext about texts.” Since students in the large survey courses often seek to draw links from the past, whether its the thirteenth century or World War II, to the current political climate, it is critical, as Berry observes, to discern the difference between “personal truth” and “dogma.” She adds, “the best literature is the most deeply moral” and Dolssa touches on a wide range of themes from female empowerment to love, friendship and courage, but that there can be a “misperception that an author sets out motivated by a certain moral.” That, Berry reminds us, is propaganda.

This delicate balance found in archival research between enthusiasm and interest in the materials, for respecting the truths of these different types of historians, and essential skepticism for the total accuracy of their content, is powerfully debated in Dolssa. Regardless of our historical subfields (US and medieval Europe, in this case), teaching our students to question – even question us – is a powerful point. By discussing a novel like Dolssa alongside a historical text like The Corruption of Angels: The Great Inquisition of 1245-1246, Berry points out, you could not just raise questions on the differences between  fiction and non fiction but also issues with chronology and geography: what do you “gain and loose” from “something narrowly confined in space and time with the study of broader movements?” In this sense, when we draw on our own personal “containers” – our reading preferences, historiographical positions, and archival methodologies – and question them, as Berry has done, we bring our classrooms into our writing process and vice versa. It’s also a critical reminder for our students that even if they don’t use ‘what’ we teach in their day to day lives, they can certainly apply the ‘how.’

[i] Unfortunately, not all of the fascinating points Berry and I discussed were able to make into this post, I’d also like to thank Julie for taking the time, in the midst of her book tour no less, for this interview! It was a terrific experience and very informative.

[i] For further details on the plot of The Passion of Dolssa, please see my post from last month. For a full list of Berry’s published works, see: http://www.julieberrybooks.com/books. Early Americanists, take note, as there are some fantastic colonial options for us.

[i] Many thanks to Mark Pegg for answering my questions and adding such a great dimension to the interview. Due to length, comments were trimmed down and excerpted. To find out more about Dr. Pegg’s scholarship and religion in medieval Europe, see: A Most Holy War: The Albigensian Crusade and the Battle for Christendom and The Corruption of Angels: The Great Inquisition of 1245-1246.