“So you study stuff?” A student had stopped by my office hours—rare, I know—and just wanted to chat. I was taken aback by her analysis of my research interests. “Stuff” seems so dismissive, belittling even to the material culture of African Americans that I study. But on second thought, that description was right on. “Yeh,” I said, “I’m interested the material and visual world of people in the past, what they purchased, stole, and bartered for, and how they curated it to give it meaning, just like you probably do on Instagram.” “Cool” was the response I got.

I could have chosen from a number of my research interests for this blog post: how to incorporate slave narratives or Ku Klux Klan trials into discussions of racial inequality, both of which are extremely difficult sources that can produce really powerful discussions. Perhaps more on that in another blog post. But I kept coming back to that one time I heard a student call my interests, my work on stuff, “cool.” I’m not afraid to admit it: I think history is pretty cool. And I’d like my students to think so too. Not so much because it makes me cool in the process (although that would be a nice by-product), but because it might make them more willing to take a chance and really delve into the process of history.

As most of you probably know, the past several decades have witnessed serious attempts to integrate material culture studies into the larger historical discipline.[1] The success of such efforts has been mixed, but surely most historians now at least accept the validity of the core issue at play: that objects can tell us as much about the past as texts can. Artifacts are crucial evidence within our examinations of the past, and so should be central to the way we teach. If we want to engage students and get them thinking like good historians, we can’t just have them rely on one kind of source base. Some of you likely don’t need convincing, but might like some ideas. For those old school sticklers out there, though, I want to make a case for not only how but why you should integrate objects into the classroom. So I’ll address some of the issues that teachers face as they contemplate bringing in non-textual sources. Then I’ll lay down some solutions to those problems. And lastly, I’m going to indulge my professorial temperament and ruminate on why it is not only good but necessary that we include more than just texts into our classrooms.

One major obstacle to incorporating objects is, well, the objects themselves. It is difficult to physically bring artifacts into the classroom. Most of us don’t own an original Wedgwood anti-slavery medallion, for instance. There are at least two solutions to this problem, beyond spending your limited funds on eBay. First, images and texts are a material culturist’s friend. But what about the materiality in material culture, you might ask. As someone who studies the material culture of enslaved and free African Americans in the nineteenth-century South, let me tell you, it’s not always possible to actually get your hands around the objects that people owned, cherished, or discarded. One of the greatest benefits to the study of material culture is that it allows us to get at the experiences of those who have been too often absent from the historical record. But that doesn’t mean it’s easy to get ahold of the artifacts consumed by most people. It is absolutely necessary that we interrogate visual and written sources with an eye towards understanding how people interacted and made meaning of the material. 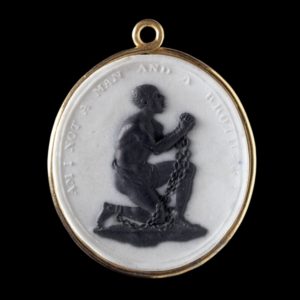 Using images and texts, you can bring in objects during your lectures (like that anti-slavery medallion), have students think about artifacts as a primary source exercise, and require the use of such sources in research papers and exams. One classroom activity might use the Uncle Tom’s Cabin & American Culture website from University of Virginia, which includes an entire section on “Uncle Tomitudes,” or the material culture of Uncle Tom’s Cabin. After reading sections of the book, students could investigate the creation and circulation of such objects as French Limoges vases and English decorative plates, and contemplate how these artifacts might have influenced the reading and reception of Stowe’s novel. These Atlantic World objects made their way into the homes of white and black Americans, providing fodder for a discussion about anti-slavery politics not only in the public but private spheres.

Of course I am a strong proponent of actually experiencing physical objects when possible, so my second solution is to utilize the cultural resources that actually hold such artifacts. Off-campus trips are great, but aren’t possible for many of us. So use what you can walk to. University archives and museums will welcome the opportunity to have students engage with objects; in fact, hold two or three of your class sessions in these spaces to give students time to explore. You might choose a number of objects that students can examine on their own or in small groups, or perhaps have them choose objects themselves using online finding aids or the expertise of curators. Then students can write reflection essays that consider how those objects interact with the major issues you’re exploring in class. The rise of consumerism is an obvious choice for such an activity, but students could also explore how objects functioned in the escalation of nationalism after the War of 1812 or the (re-)entrenchment of white supremacy after the Civil War. And don’t forget to have them incorporate their analyses of objects into their final papers or exams. Requiring them to integrate the study of artifacts with the more traditional examination of texts will reinforce the belief that history is made up of much more than just what some old white guys wrote down.

I repeat: don’t make objects secondary to texts. Show your students that a multi-layered approach to historical inquiry produces a more nuanced and balanced understanding of our past. They already know that stuff is important; most of them are avid consumers. Make them think critically about the stuff in their present, as well as in the past.

As I noted above, students have to be willing to take a chance. History is not a collection of absolute facts that must be memorized, but is a process that might completely change your worldview. That’s a scary proposition for a 20-year old or a 70-year old. When they are worried about looking “dumb” or “wrong,” students shut down. So we need to provide opportunities for them to explore with less anxiety. And, from what I’ve found, students exhibit less discouragement or worry over objects and images than they do over historical texts. Scribbled handwriting or smudged print, antiquated words or contemporary academic jargon, a lengthy essay or stylized poem: texts can be intimidating. Of course, objects and images have multi-layered contexts that must be understood; they are not clear receptors. Yet students typically don’t have the same initial hesitation with artifacts, even if it’s hubris based on their constant interaction with objects and images. Artifacts can serve as a useful starting point for having deep conversations about sources, the historical process, and the connections between past and present.

So that’s why I incorporate my research on “stuff” into the classroom: to demonstrate the diversity of sources and stories in history, and to get students to engage in the historical process themselves. There are so many ways to do so. How do you integrate non-textual sources in the classroom?