I start every history course I teach with the same primary source. I put a colorful drawing on the screen and tell my students that the image comes from a diary that a fourteen-year-old kept while traveling with her family in 1935. 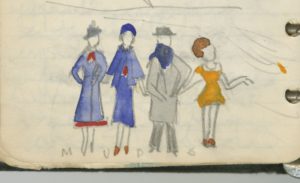 I then ask my students, “Who do you think the diary belongs to?” Typically, a few students chime in that it is undoubtedly the girl in the yellow dress. “But what if I tell you her name was Victoria?” I challenge them. They look at me puzzled and then return their gaze to the screen. Slowly, I see the look of realization sweep across their faces as they scan the image more closely and find a “V” at the bottom of one figure’s feet. I explain that the girl in yellow—the figure they all assumed to be fourteen-year-old Victoria—is actually her younger sister, whom Victoria referred to as “Sisa” throughout her diary. Victoria, in fact, is the second figure on the left—one of two figures that look fairly similar in their blue and red clothing. Now, I have their attention.

My goal in beginning each course with this primary source is two-fold. First, I want to challenge my students’ traditional understanding of history as events and dates, along with their assumption that adults are the only historical actors. Second, I want to introduce them to primary sources and the importance of suspending their contemporary notions, such as what they understand age to mean and a teenager to look like, when they read them. Fourteen-year-old Victoria helps me do this: although only being a few years older than her sister, Victoria drew herself appearing more like her mother. “What might this tell us about growing up in this moment?” I prompt my students.

As a teaching assistant for Global History and the second half of the U.S. survey, I often incorporated primary sources by and about young people, from drawings like Victoria’s to juvenile magazines and even graffiti. Each time I used these sources I found that they stimulated some of the best discussions and interest in history as a subject of study. When the chance to design my own course came, I knew I wanted to offer something that was primarily about young people. I settled on a course that would trace the experience of young people in the United States since the turn of the twentieth century. As I designed the course, which I titled “Youth Cultures Since the Progressive Era,” I realized that I would be covering many of the same themes—from immigration and urbanization to popular culture and civil rights—addressed in the second half of the U.S. survey course. However, I would simply be covering these themes by focusing on how they affected young people and young people affected them.

This realization is one of the motivating factors behind my blog posts. The discussions my students had in our classroom and the private conversations I had with them during office hours convinced me that one of the best ways to get students interested in history and open to participating in discussions is by including their age group in our courses. Through my blog posts this year, I hope to share ideas and resources for how instructors can do this, especially in their U.S. survey courses.

I would like to begin with this guide from Children & Youth in History, which I assigned the first week of classes to get students thinking about what primary sources are and how they can read them. Beyond this guide, Children & Youth in History provides an array of primary sources by and about young people from all over the globe, as well as Case Studies and Teaching Modules on topics ranging from Childhood and Transatlantic Slavery to Material Culture and Childhood.

The same day I challenged my students with Victoria Brown’s drawing, I used the Children & Youth in History primary sources to show them a Christmas poem by students at the Pima Indian School, the 1930 Children’s Charter, and a student essay on John F. Kennedy’s assassination. These sources helped illustrate a few of the various forms primary sources can take and foreshadowed some of the topics we would cover in our course. Whether you are designing a syllabus or looking for a last-minute source to help illustrate a lecture point, the website is a great place to start if you want to incorporate the history of children and youth in your course.