Our discussion of the 1970s began with a question for today: which would leave you more disgusted and demoralized, a terrible economy defined by inflation and few job opportunities OR a presidential political scandal that showed wickedness in high places. In groups of two, my wonderful students chattered and chattered. The result was unanimous: the political scandal would be entertainment, while the economic trauma would have such a negative effect that it would be far more important to them.
This led directly into a terrific discussion of how their answers were built upon the history we were studying. Major Problems details not just the “fall of presidents” but in some ways the “fall of politics.” Watergate gets the lion’s share of attention, but the Pentagon Papers and Vietnam were just as devastating. My students don’t trust leading politicians. They expect scandal, hypocrisy, and lies. They’re living in a history transformed by the late 1960s and 1970s. We then talked about how different this was from the age of the New Deal when farmers and city folk, mothers and daughters, artists and mechanics wrote to Franklin and Eleanor Roosevelt for help. We contrasted our time with the era of the fireside chats when hearing the voice of the president was inspiring, and not infuriating. I thought, all in all, what they didn’t vote for (presidential scandal) was a great entrée into some of the historical points. And to underscore this, we watched the trailer to All the President’s Men and saw how two supposedly bumbling reporters became political heroes by exposing political scandal. 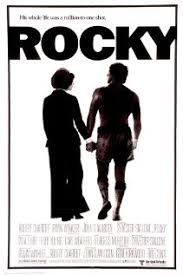 Then we got into the impact of the economy. This is what they voted for as most frustrating, and so we watched a little bit of the Rocky trailer from 1976. There is so much there. The poor, ethnic Rocky (the “Italian stallion”) whose entire life was a “million-to-one-shot” living in the run down urban blight that was Philadelphia. He’s to fight Apollo Creed, the black champion who believes in opportunity so much that he’ll give Rocky a chance, who parades and parodies American nationalism so much during the Bi-Centennial that he dresses up first as George Washington then as Uncle Sam to overexpose the nation. When it comes to racial politics, notions of nationalism, the rise of new ethnic identities, and the power of stagflation, I don’t think there’s anything better than Rocky (of course, we don’t find out till Rocky III that Mick, Rocky’s trainer, is Jewish … but that’s another storyline).
And finally, we back tracked a little with the trailer for The Graduate. Underneath the political scandal and the economic travail was another massive shift – that in assumptions of what was expected of “men” and “women.” On one hand, it’s hilarious to watch Dustin Hoffman not know what to do when confronted with questions like “what are you going to do with yourself” or when Mrs. Robinson is disrobing. It’s also funny watching this “track star” run (he doesn’t look very fast!) But what I want my students to see – and they can read about this in Hist is that what it meant to be a man and a woman in American society was changing. The new wave of feminism had altered what was and what wasn’t appropriate behavior, and Hoffman’s character signaled that. We addressed several articles from Major Problems that discussed appropriate femininity in the 1950s so now the question became what and how should men act not just in a post-Civil Rights world, but also in a post-patriarchy world (at least where patriarchy is accepted as a norm).
Next week, we follow more of Rocky and listen to the powerful 80s rock of “Gonna Fly Now” and then jet into the actual air with Tom Cruise and Top Gun. There, American patriotism and manhood are going to fight back, bed their superiors, and win the Cold War through a bravado that overcomes the Vietnam complexes. Somehow I’ll also need to work in the rise of Oprah – after teaching my friend Katie Lofton’s amazing book on the icon in my US religious history class.