I too heart the Seventies, although I try not to call it that–too decadent (get it?). 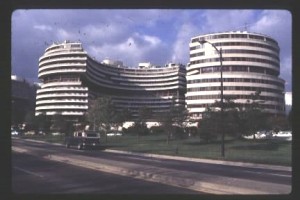 But it is a fun one to teach. And I was pleasantly surprised to see that a full three-quarters of my students knew roughly what Watergate was before I began the story: a hotel. They may not have known the intricacies of the story, but they were clearly aware of the term, and its importance in history.

The theme of today’s lecture is something like Nixon’s America–the Limits of Liberalism, and I get to explore the weird thing that is Tricky Dick. Students are shocked to see that he was the one who created (eventually) the EPA, that he doubled the funding to the NEH and NEA, that he brought affirmative action to the federal government. They’re also shocked to hear about Ping-Pong diplomacy, the winding down of the Vietnam War, and SALT.

In fact, one student asked a great, if slightly off question: does all this stuff–especially d’etante–make up for Watergate? I don’t quite think anything is worth sacrificing democracy for, and I think that’s more true in the case of Nixon, when all his actions were more or less odd attempts to ensure his re-election and defang what he saw as the Eastern Establishment that was out to get him.

The next lecture is on late 70s culture–Rocky lives.