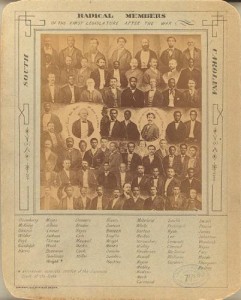 As we teach Reconstruction early in the semester (or do we all do it at the end of the semester now, as a couplet to the Civil War), most of us probably show the 1878 image of the South Carolina legislature, with all those African Americans considered Radicals (see left).

I was stunned, then, by the news that today is the first day in United States history that we’ve ever had two black senators at the same time.  I saw the story in Slate, which reports that Massachusetts Gov. Deval Patrick will appoint Mo Cowan, an African American, to replace Sen. John Kerry, who has been approved as Secretary of State.  Cowan joins South Carolina’s Tim Scott as fellow African Americans in the esteemed chamber.  So reports the story:

I’d thought that the Reconstruction era produced multiple black senators, and it did, but they served a few years apart. And since senators were appointed by legislatures until 1914, that means only three of the eight black senators were elected by voters.

Thus, those who are tempted to teach the history of the United States as one onward and upward need to temper their enthusiasms a bit.  There has of course been a good bit of progress, but it’s more often two steps forward, one step back, or worse.

2 thoughts on “For the first time ever, we have two black senators at the same time”