Our last post in a series exploring how we bring research into the classroom comes from Nicholas E. Bonneau, a PhD candidate in history at the University of Notre Dame and the current Carpenter Fellow in Early American Religious Studies at the University of Pennsylvania’s McNeil Center for Early American Studies. A historian of religion, environment, and medicine, Nick explores how families and communities of faith reacted to epidemics of emerging and reemerging infectious diseases in the early modern Atlantic World.

Smallpox was one of the great horrors of colonial North American life. It killed up to 50% of those infected, whether European, Native, or African. While all survivors acquired immunity to further attacks for life, they were often left horribly scarred and could carry the infection until their last eponymous sore had healed. Little wonder, then, that when news of a possible prevention arrived in New England in the early eighteenth century, it got everyone’s attention. The decision to inoculate – to cause a more minor smallpox infection in order to avoid a later more devastating smallpox infection – rankled as many minds as those it gave hope. Newspapers printed articles that spewed vitriolic anger at opponents. Egoistic leaders publicly denounced professional expertise or technical innovations with anecdotal and scriptural evidence. Ad hominem attacks confused audiences.

If the great Boston Inoculation Debate of 1721 sounds familiar to similar debates today, it should; and this is part of what makes it such an incredible subject to teach. In the fall of 2015 I had the privilege to cover it in two survey courses: US History to 1877 at my home institution and a History of Medicine and Public Health survey at a prison deep in the Midwest’s “Rust Belt.” The first classroom lay nestled among manicured lawns at a top-20 university. The other was part of a prison outreach project reluctantly tolerated by the administration of a world lost in razor wire, armed guards, and heavy doors. Each survey followed the classic goal of familiarizing students with important events, people and changing ideas across time – an especially important foundation for inmates who lacked familiarity with Western History. However, students were ultimately assessed on their ability to work with primary sources, challenge secondary source interpretations, and place historical actors in contexts different from our own. The inoculation exercise offered them a chance to do all three.

This was the background they received: Inoculation was a method long common outside the West. It took hold in Boston when Onesimus, an African slave, taught it to his master, the Puritan clergyman Cotton Mather, who immediately recommended it to others. Opposing Mather was Boston’s only university-educated physician, William Douglass, whose professional reservations about inoculation echo through to the present. Mather and his associates had no formal background in the field and were contemplating experimentation with human subjects – children in fact – without the approval, let alone supervision, of better trained minds. The presentation of Douglass as a physician arguing against inoculation and Mather a clergyman arguing for it complicates students’ assumptions of proto-scientific progress. It is an antidote to the dreaded question: “So who was right?” 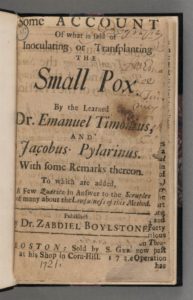 Cotton Mather. Some account of what is said of inoculating or transplanting the small pox. Boston, 1721. Houghton Library, Harvard University, Cambridge, Mass.
http://nrs.harvard.edu/urn-3:FHCL.HOUGH:1204052

Having read eleven short letters and articles by William Douglas, Cotton Mather, Benjamin Colman, and others, I divided students into an even number of small groups and randomly assigned them to a side – either pro- or anti- inoculation. They then had to deal with the very real questions necessary to empathize with the perspective of their actors. This was no easy task. Both Mather and Douglass had a deep faith in the divine, so appeals to scripture or reductionist claims of religion obstructing science failed miserably. Furthermore, both Mather and Douglass viewed ongoing medical progress as a chance to improve the human condition; it was the manner by which individuals implemented these new methods that was central to the debate. 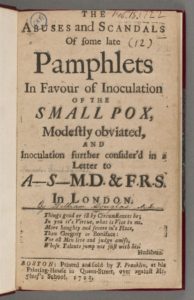 William Douglass. The abuses and scandals of some late pamphlets in favour of inoculation of the small pox… Boston, 1722. Houghton Library.
http://nrs.harvard.edu/urn-3:FHCL.HOUGH:1204051

After taking several minutes to discuss their position among the groups and consolidate the important points of their position, we began our own debate. I prompted arguments in a style they would be familiar with: that of a presidential “town hall” format, in which I read questions from “audience members” – fictional composites of real individuals I had uncovered in my study of epidemics in New England. Here are two examples:

“My name is Joe the Cooper. I have four children, 12, 10, 5, and 2. Two of them work with me in my shop. Keeping in mind what the loss of labor, let alone the risk of illness, would have on our lives and livelihood, what would you recommend?”

“I am a clergyman in Kingston, NH. We have very little contact with Boston or Salem, but are often overwhelmed by disease every decade or so, at times almost destroying our little town. Based on scripture and experience, why would I not encourage my congregation to inoculate immediately?”

Both the elite university students and the convicted felons enjoyed the respite from the normal format for discussions of readings and came up with interesting perspectives. Two particular arguments came up without direction in both classrooms. Anti-inoculators urged their opponents to avoid being complicit in murder – after all who but God should allow any person to die, even if to save others – a unsubstantiated claim given the current data available. Pro-inoculators rebutted that this was already a manifestation of God’s will, questioning if their opponents recognized Providence and accusing them of endangering lives who might be lost prematurely – itself murder by negligence. Later, as the parallels between current scientific debates grew clearer, pro-inoculators reaffirmed their confidence in local doctors like Boylston who they all knew to be competent physicians, despite the critique of new “fancy” European physicians like Douglass. Anti-inoculators saw this as an anti-intellectual attack made by a backward provincial people (both classrooms); they directly quoted Douglass’ use of the Fable of the Fox and suggested that an ignorant physician (Boylston) who had “lost his tail” (read: expertise) and encouraged his fellow foxes to get rid of theirs to make himself feel better. Finally, they all recognized the frustration of James Franklin – the publisher of the Courant who, when trying to present both sides impartially, became accused by more radical sects of publishing inflammatory and insulting remarks. In both classes, the parallels to modern debates and the use of misinformation and personal attacks on the media were immediately recognized and had to be used as teaching moment on how far one can go making ahistorical claims about human institutions. In the end, students had to accept that there was no way for either Douglass or Mather to know how it would work it out. No one could say “who was right.”

We might now ask our own dreaded question: “So, did it work?” Within a month I got my answer. I first witnessed some success with the imprisoned class studying medical history. While using newspaper articles to review the peculiar incarceration of Mary Mallon (Typhoid Mary), one student remarked, “Yeah, but locking her up worked, right? She was a carrier!” Immediately other students complicated the conditions of her imprisonment and pointed out the limitations and successes of bacteriology and public health at the time. “How do they know they were right? And why did she think she wasn’t wrong?” Just a week later, a small group of students after class at the university wondered at Washington’s decision to inoculate troops against smallpox at Valley Forge. “How could he know it was right? That must have been terrifying!”

Greater than facilitating a more sophisticated way of thinking about historical events and actors, the inoculation debates provide a lesson about the complexity of public health issues and the very real consequences of life and death. This is so much more than a luxury in our digital world where weeding out the misinformation of “fake news” from more carefully vetted information becomes increasingly difficult. The ability to empathize with an opposing view while paying attention to time-sensitive physical conditions is useful to all people – the free and the incarcerated, the wealthy and the poor.