Teaching the US I and II surveys every semester, one of the first challenges is getting the material to “catch” with students. It’s usually a little easier with US II, but there’s no magic formula. Getting students to see people in the past as people, living complicated lives and facing difficult choices, is key to historical thinking. The other side of the coin, of course, is helping students understand that people in the past had different ideas about what the world should look like, that even “common sense” itself is historically specific. Engaging with the past should make the past seem more familiar and more strange at the same time.

This semester, in US II, my students have had a harder time keeping these two impulses in tension, because everything seems to resonate a bit more right now. When we read Mary Lease, students said her Populist arguments sounded like they could have come from a Trump or Sanders speech from the 2016 campaign. When we read the Niagara Movement’s Declaration of Principles, students saw an unbroken history of unjust imprisonment and contemporary voter ID laws. Their writing is suffused with “nothing ever seems to change” more than I’ve ever seen.

In these situations, my impulse as a teacher is to push students to see the specific differences that show us how things have actually changed over time. This is a pretty normal part of teaching history, but it feels different now. The reason my students are struggling not to collapse the past and the present is that it feels harder to say the past is different right now. I am finding it harder not to let it all run together.

One goal of my survey courses has always been to help students reconsider narratives of “progress,” stressing incremental and incomplete change. This always seemed important, given the narratives of progress that students often bring to the second half of the survey. Now, though, in a moment when so many of my students are fearful that even that incomplete and incremental progress was an illusion, I’m rethinking the appropriate balance of that similar-yet-different tension that is central to doing history.

One thing that has helped me help my students is going back to the big identity wheel we draw in the first week of class. I’m sure many of you do something similar. I draw a sloppier version of this 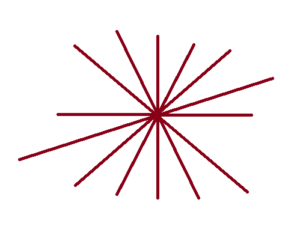 on the board, and then students name as many identity categories as they can, going around the wheel. We use this as a reminder that the people we look at don’t fall neatly into one category, and that their motivations are therefore neither singular nor straightforward.

Every time we discuss a primary source, we try to write down all the aspects of the author’s identity that we can discern from the text. For instance, when we discussed Mary Lease, whose arguments reminded them so much of rhetoric they’d heard in the campaign, they were able to list that she was a farmer, and a Populist, and a “Westerner,” but also that she was a woman and a teacher.

Some students argued that Lease’s speech was more of a “rant,” and wondered whether it was the most effective approach. I asked them what ways they had of influencing the government, of changing things they didn’t like. The first suggestion was “have a revolution?”1)This is always the first suggestion when I ask this question.  When prompted for some less violent approaches, they offered “protest” and “speak out” and “talk to your senator!” When I asked them how they got their senator, someone finally said “voting?” I asked them to look at the identity categories again, and think about which of them might help us understand why Lease might try to influence the federal government in this less-direct way. When prompted, they knew she couldn’t vote, but none of them had really thought about it before that moment.

Reckoning with the fact that the woman we were studying could not vote allowed us to think about who in our classroom could have voted in the period we were studying. Thinking about that wheel of identity, it became clear pretty quickly that almost everyone in the room would be excluded from the franchise for multiple reasons. That led us to a discussion of the exclusion of felons, the direct election of senators, and how exactly those without power might persuade or force the powerful to dilute their power by expanding the franchise.

By pausing to think about one way the life of this woman in the 1890s was different from ours, my students were able to see the historical distance between then and now. It un-collapsed history for them. They could recognize that things had changed, and though those changes aren’t permanent, and weren’t inevitable, they were still possible. Right now, reminding students that change is possible seems like an important thing.