Every semester I try something new in the classroom. Sometimes this may involve adding activities such as the fish bowl, working in the archives, or having students write on the board to generate ideas. I take these assignments and tweak them as I go along because, as we know, every class is not the same. What works in one class may not necessarily work in another one for a myriad of reasons. Today, I want to briefly talk about an assignment I did this semester that I plan to use in upcoming semesters, in various ways. Even though I did this assignment in a literature classroom, it can work in a history classroom as well.

Scrolling through Facebook a few weeks ago, I cam across a post on a friend’s wall about an assignment she was doing in class. It was a mixtape assignment where she had students construct a mixtape that would be a representation of the South. Students had to construct the mixtape then describe why the chose the songs that chose. Her assignment appeared to be a lengthier project than I had time to do this semester; however, I altered the concept some to fit with what we were doing in class over the past few weeks.

As we began reading Solomon Northup’s Twelve Years a Slave and watching a clip from the film version on the first day, I thought about the mixtape assignment and the ways that I could incorporate something like that into our discussion of Northup’s narrative. Ultimately, the assignment became a sort of soundtrack for Northup’s text. While the film has a soundtrack, I wanted students to think about songs they knew that would relate to any part of Northup’s story.

For this assignment, I set the groups (3 students to each group) up in discussion forums so they could share their ideas about the soundtrack outside of class. We took some time at the end of a couple of classes for students to discuss their ideas as well. The discussion boards allowed me to see their thought process and to monitor their progress towards completing the assignment. They had one week to complete their soundtrack, and they created some really interesting correlations between the music they chose and Northup’s narrative. Before I discuss some of these, though, I want to share the prompt that I provided for the students.

This is the graded section for the soundtrack. Place your completed list here. (I will check the discussion board to see if you participated in the conversation or not.)

In this discussion, your group must come up with a soundtrack of at least five songs for Solomon Northup’s Twelve Years a Slave. You can use this space to discuss the songs, but I want one post that has the following.

Make sure you cite the pages from the text in the summary and or the discussion. You must have five songs and five passages.

When I start reading through students’ choices for their soundtrack selections, I became intrigued by some of the scenes they chose to explore. A majority, of course, focused on scenes such as Burch flogging Northup in Williams Slave pen, Tibeats attempting to lynch Northup, and Northup flogging Patsey. However, others chose scenes such as Northup’s description of Christmas, Northup and the slave dealers passing through the streets of Washington on their way to the Brig Orleans, and Northup’s return to his family at the end. It is these selections that I want to share today and talk about some.

For Northup’s discussion of Christmas on Bayou Boeuf, one group chose Frank Sinatra’s “Have Yourself a Merry Little Christmas” for the soundtrack. Initially, this selection made me pause, but once I saw the reasoning, the connection made sense. Northup describes the Christmas season as the period when him and those enlasved with him have the most freedom. Northup describes the season by saying, “The only respite from constant labor the slave has through the whole year, is during the Christmas holidays . . . It is the only time to which they look forward with any interest or pleasure.”

Notably, the students pointed out that the tone and tempo of Sinatra’s “Have Yourself a Merry Little Christmas” fits with Northup’s description. The season served as a respite from the constant labor, and the song’s tempo carries on in a languid way, conveying a sort of moment of rest. Likewise, the students noted that since the Christmas season provides rest and some semblance of freedom, Northup and others would not want it to end. The song is not necessarily upbeat and happy, so the tone mirrors the feeling that Northup and the other enslaved individuals do not look forward to the season ending.

A few of the groups chose to use songs to describe the Northup’s experiences in Williams Slave Pen in Washingto D.C. One group chose to focus on Burch and the slave dealers leading a coffle of enslaved individuals through the streets of the capital under the cover of darkness. For this scene, they chose Woody Guthrie’s “This Land is Your Land,” a song that begins with praise for the nation but turns to highlight the ways that America fails some of its citizens. This stark juxtaposition occurs in Northup’s narrative as well, as I have discussed before.

Northup describes being led through the streets by stating, “So we passed, hand-cuffed and in silence, through the streets of Washington through the Capital of a nation, whose theory of government, we are told, rests on the foundation of man’s inalienable right to life, LIBERTY, and the pursuit of happiness! Hail! Columbia, happy land, indeed!” The slave coffle’s path, passing by symbols of supposed freedom and equality provides a stark contrast and condemnation on the American ideal of equality espoused from within the hallowed halls of the capital and across the nation. In this manner, Guthrie’s song and Northup’s description both illuminate the stark realities of he false equality housed within the myths of America.

For Northup’s reunion with his family, the groups chose various songs from Bob Marley’s “Redemption Song” to Louis Armstrong’s “Nobody Knows the Trouble I’ve Seen.” All of the choices for this scene highlighted the tensions apparent in the reunion. While happy and joyous, Northup returns to a family he has not seen for twelve years accompanied by the memories of his time in slavery. One group’s choice of Daniel Martin Moore’s version of the hymn “It Is Well With My Soul” highlights these contrasting emotions in a melancholy manner.

What makes this song even more fitting is the story behind its composition. Horatio Spafford lived in Chicago with his wife and four daughters. During a trip to Europe, his wife and children were involved in a collision with another boat, and his four daughters perished. On his way to see his wife, the captain of the vessel he was travelling on told him the sport where his children drown; there, he wrote the hymn.

Spafford’s story, along with Northup’s form a convergence that makes the hymn a fitting choice for Northup’s reunion with his family at the end of the text. He notes the joy and fear accompanying the scene: “When the violence of our emotions had subsided to a sacred joy—when the household gathered round the fire, that sent out its warm and crackling comfort through the room, we conversed of the thousand events that had occurred—the hopes and fears, the joys and sorrows, the trials and troubles we had each experienced during the long separation.”

In conclusion, I have created a Spotify playlist of the songs that he groups chose. You can listen to the list below. (Just click on the image.) 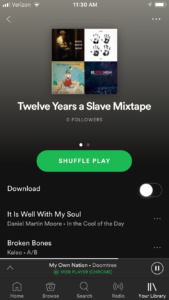