Wesley G. Phelps, Assistant Professor of History and Director of Undergraduate Studies at the University of North Texas 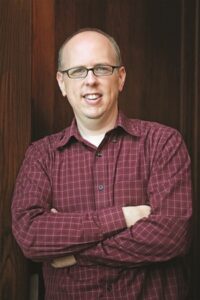 In late August 2005, I walked into a conference room in the Humanities Building for my first graduate seminar at Rice University in Houston titled “Introduction to Doctoral Studies.” Expertly taught by Dr. Carol Quillen, one of the most brilliant scholars I have ever had the pleasure of knowing and now the president of Davidson College, the seminar introduced new graduate students to significant historiographical debates as well as to theoretical texts by writers such as Michel Foucault and Edward Said, whose books had been sitting on my shelves at home for weeks in preparation for the new semester and whose names I had managed to mispronounce repeatedly. During that first seminar meeting in 2005, Dr. Quillen used a word I was sure I had never heard before: epistemology. I glanced around the seminar table, certain that the looks on my cohort’s faces indicated they knew exactly what she was talking about and equally certain that Rice had made a huge mistake admitting me into their doctoral program in history.

I went home that afternoon and pulled down my American Heritage Dictionary, purchased in 1996 during my first semester as a student at Richland Community College in Dallas, and looked up this strange word.

epistemology: noun, the branch of philosophy that studies the nature and theory of knowledge.

By mid-semester, once I had gotten to know my classmates better, I discovered that many of them had shared my sense of bewilderment on that first day of class, and a few had even felt the first tinge of the imposter syndrome that, at least for me, reared its head often during that first year, eventually fading into a quiet whisper until comprehensive exams coaxed it back out of its cave. My interest in the meaning of epistemology did not fade, however, as the Rice faculty exposed me to ideas I had never before considered. The theory of knowledge and the questions of how we know what we know, how we arrive at the truth, and whether truth even exists, continue to rattle around in the back of my mind in nearly everything that I do.

Nothing has made the relevance of the study of the nature of knowledge clearer or more urgent than the assault on truth we have witnessed over the past few years. From climate change denials to alternative facts to the rise of the Deepfake to the politicization of wearing masks to prevent the spread of COVID-19, we live in a world where we cannot even seem to agree on the desirability of shared knowledge, much less on what that knowledge might actually consist of. These sharp disagreements on the nature of knowledge have led many observers to declare that we are living in a post-truth era, where the validity of knowledge, facts, and even reality itself have become subordinate to an individual’s belief system and political ideology. If there were ever a time when more people should go home and look up the word epistemology in their dictionary, it is now.

This semester, I am attempting to bring epistemology into my introductory U.S. history survey course by framing the course content with questions about the state of truth in our current world. At the University of North Texas, we reserve a section of each half the U.S. history survey course for the Honors College, and these sections are themed and capped at 30 students. I am teaching Honors U.S. History since 1865, delivered remotely via Canvas, and I decided this would be an excellent time to try something new and give my introductory course a facelift. As I explained to the students on the course syllabus, the theme for the course is “truth,” and I elaborated on that theme with the following questions: What is truth? How do we determine truth? How do we know what we know? Does the concept of truth have a history? How has the meaning of truth changed over time? Are we currently living in a post-truth era? If so, who killed truth?

The materials I am using for this course consist of the American Yawp, an open-source U.S. history textbook available free on the Internet, as well as a selection of podcasts and their accompanying primary documents. We begin the semester with a four-part podcast series by NPR’s On Point titled “In Search of Truth,” during which host Meghna Chakrabarti explores topics such as the history of truth in the ancient world, the science of truth, how the powerful manipulate truth, and elements of a post-truth era. We then turn to historian Jill Lepore’s brand new podcast series titled The Last Archive. During these ten episodes, Lepore traces the history of evidence, proof, and knowledge, ultimately asking the question, “Who killed truth?” The series begins with the murder of Lucina Broadwell in rural Vermont in 1919 and ends with the phenomenon of big data in Silicon Valley in 2020. Along the way, she highlights the ways that historians piece together evidence to interpret the past, pulling back the curtain on how professional historians conduct their work and opening up larger conversations about how the discipline of history might provide guidance in our current world where truth and empiricism seem to be under attack. One of the best parts of Lepore’s podcast is that she included on the website for The Last Archive a teaching guide and many of the primary documents she used to create each episode, making it easy to assign them to students and to encourage them to evaluate Lepore’s conclusions based on the actual evidence she used.

My goal for this course is to use U.S. history in order to urge students to think critically about the concept of truth and our methods of gathering knowledge. Though some students may arrive at other conclusions by the end of the semester, I hope they will leave my course with a conviction that any truth claims that they make or that are presented to them by others should be held up to the scrutiny of empirical evidence. In that way, perhaps the discipline of history can be a useful tool to help them make sense of our ever-changing world.

One thought on “The Search for Truth in the U.S. History Survey Course”