Teaching United States History is excited to present Teach My Book, a series of posts where distinguished authors reflect on their work and how instructors might integrate their insights into the classroom. Our thoughts today come from Carla Gardina Pestana, Professor and Joyce Appleby Endowed Chair of America in the World at UCLA. Dr. Pestana is discussing her new book The World of Plymouth Plantation (Harvard 2020). 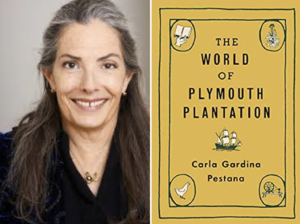 The World of Plymouth Plantation argues that Plymouth was a connected place. This observation might seem obvious, but consider how we remember Plymouth: as an isolated outpost, English settlers almost alone in the wilderness, arriving at the start of winter on a cold, wind-swept coast, to be greeted by a lone native man. Many famous images of Plymouth emphasize that sense of isolation, which is also central to the idea that they came to American shores to pursue religious freedom. This vision of Plymouth does not contemplate the fact that it was linked not only to England but to many other places beyond southern New England, nor that it relied on those connections to survive and thrive.

The book is indebted to ideas central to Atlantic history. This historiographical shift, now decades old, emphasizes a larger canvass for British North American history than simply the thirteen colonies. Thinking of how a place in one of those colonies was connected to other places within and beyond British North America is a move perfectly in keeping with Atlantic history.  Exploring those linkages helps us to understand Plymouth better, in my view. Consistent with its Atlantic orientation, the book is organized around aspects of its history that connected it, using the particular categories of people, ideas, and things. Each chapter considers one of those three aspects, and each section cycles through them in turn. So, for instance, chapters exploring people consider traders or wives, those that look to things examine clothing or books, and ideas are tracked regarding refugees or plantations.

In addition to the US history survey—in which you would use it to cover the seventeenth century, to give a more accessible view of life in New England, or to correct grade-school myths of the American past—this book could be used in an Atlantic history course, a World History course, or an Early American history course. Chapters are short and written in an accessible style. Each chapter begins with a short vignette, and they are not the familiar vignettes associated with Plymouth—a Rock, a meal, a meeting with a native man. The writing eschews expert terminology, or—when it does not—it explains the terms it does use. For instance, the chapter on “plantation” discusses what that term means to us today but also what it meant to those who dubbed Plymouth a plantation in the seventeenth century. The discussion acknowledges the contemporary debate that associates the term with slavery and seeks to banish its use, but also corrects the idea that all references to plantations are in fact references to enslavement. Since chapters are short and, as described above, they cycle through each of the conceptual categories of people, things, and ideas, assigning a set of three short chapters might be preferable to assigning just one—assuming the goal is to give students a sense of those various forms of connection. In that case, I would recommend including the introduction, conclusion or both as well, since these also explain the standard view of Plymouth, how this book departs from that standard view, and how the different categories fit into the larger whole. Alternately, any one chapter can stand alone, so feel free to use one on Wives (to discuss gender), or God (religion), or Tobacco (plants moving around the Atlantic).

Methodologically, the book uses the simple expedient of reading the original sources for signs of Atlantic connections. Plymouth is rich in source material, including several first-hand accounts, William Bradford’s famous narrative, and court records.  I read all of them, and noted all the various connections they elucidated, which I then grouped into categories. The topics for each of the eighteen chapters emerged from this process. As with any research project, some of the material I collected never got used. Much of it was used, and it gave shape to the book. In doing this work, I drew on my own wide reading over many years in Atlantic history. Research always remains labor-intensive, but spending a great deal of time working in a particular historical period does offer the benefit of building a solid base in knowledge upon which the researcher can draw for various projects.

Given Plymouth’s importance to national mythology, many of those sources are now readily available. For example, the State Library of Massachusetts has just digitized William Bradford’s Of Plimoth Plantation, available here: https://www.mass.gov/info-details/bradfords-manuscript-of-plimoth-plantation. Teachers can also tell the fascinating story of the loss of the manuscript and its “repatriation” after many years to Massachusetts, which gives an opportunity to think about the building blocks of history. Other early sources are also available in full or in part.

The World of Plymouth Plantation corrects many myths about early American history. In doing so, it reflects many years of teaching and researching. My first book was a study of religion in New England. Even as I turned toward Atlantic history and the Caribbean, I continued to teach and think about New England, and this book brings together the fruits of that long consideration. Many—dare I saw most—things we think about Plymouth are, if not wrong, at least somewhat off base. For example, students believe that the people of Plymouth wore somber colors. That was not the case, despite the visual evidence of many nineteenth century paintings to the contrary. We also believe they came from a separatist English church in Leiden to achieve religious freedom, another image that gets much of the history wrong. About half of those on the Mayflower were from that Leiden church, but in Leiden they enjoyed complete freedom of worship. In addition, any thought of religious freedom in 1620 meant something very different from what our students in 2020 think (or what the late-eighteenth-century promoters of Plymouth thought when they began to extoll Plymouth in those terms).  The book does not so much debate these misconceptions directly—in most cases—but rather gives a more grounded, accurate sense of their concerns and experiences.

The book, like my description of it above, never uses the term “Pilgrim” to refer to the residents of Plymouth Plantation. In that, I follow their lead.  This issue is discussed in the book—see the chapter “Refuge” for a discussion.