There are countless different ways to write, and things and ideas to write about. And the Internet offers a kaleidoscope of different formats, media, tools, sights, and sounds to tell your stories…We’ve got to start thinking of the Internet as something more than a glow-in-the-dark newspaper.—Jon Bois, Sportstwriter for SBNation.com1)Jon Bois, “17776: Questions and Answers.” SBNation. (Accessed October 23, 2017)

I’ve wrestled with that quote quite a bit since it originally appeared this past summer. Bois, a sportswriter for the site SBNation.com, is an author that experiments with innovative forms of content delivery, and in doing so blurs traditional boundaries of narrative storytelling. As an educator that uses the Internet in the classroom daily, I’m struck by how often I view it as simply that: a “glow-in-the-dark newspaper.” In thirteen years in the high school classroom, the explosion of web-based resources and increased online historical scholarship has been a welcomed, albeit dizzying, development. When I first began my career, I attended a Gilder-Lehrman teaching seminar where we were given early access to a beta, not yet public version of the now ubiquitous Trans-Atlantic Slave Trade Database. Podcasts were barely a thing in 2005, but now in 2017 I routinely assign episodes of OIEAHC’s Doing History for students. Even in these instances it too frequently feels like students default to passivity, content to passively absorb content from the web. The “kaleidoscope” Bois refers to has certainly diversified student experience in my history classroom, but has it supported student learning?

I have little doubt that the aforementioned sources (and countless others like them) have increased student enthusiasm and curiosity in my classroom, which has thus supported learning. But it was in our adoption of the online annotation software Hypothesis that I first began to understand the potential for innovative pedagogy derived from the Internet. Meant initially to simply give students an annotation option for our online textbook (The American Yawp), our use of Hypothesis evolved rapidly. The increased social aspect of reading was the most immediate transformation. Gone were forced and awkward discussion board posts delivered via our Course Management system, as they instead took place organically each night. Students actively sought out one another’s annotations so that they might glean insight from their peers or challenge their analysis. These conversations inevitably spilled into class discussion the next day. Further, the social aspect of the annotations allowed me to check for student understanding each night, without the need for incessant quizzing, thus allowing for more efficient use of class time. Often, I’d find myself adjusting lessons before class, nudging particular elements of teaching to respond to the needs of students, all derived from their questions and annotations on the previously assigned reading. Even in its most basic application Hypothesis opened up areas of inquiry and discourse that I rarely saw in more traditional class formats. And when we began to embrace what Bois describes as the  “countless different ways to write” on the Internet, things really took an interesting turn.

In the midst of a contentious, heated presidential election season our American Studies class read portions of Tocqueville’s Democracy in America. Given the tone of the election and a heavy emphasis and class interest on gender roles in nineteenth-century America, I assigned “How Americans Understand the Equality of the Sexes.” But the students were tired. They’d been inundated with election coverage, they had just finished a busy week, and the thought of traditional annotations on a heavy topic seemed too much to bear for many in the class—so we used GIFs to annotate instead. 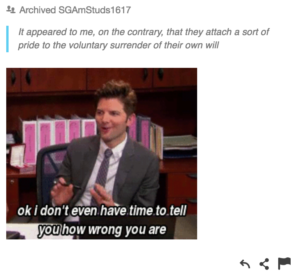 For many students, the chance to “write” informally and to assess Tocqueville’s account of women in American by way of animated GIF proved liberating, and in some instances, cathartic. Indeed many even went back and revised and expanded upon their annotations after the election. The GIF assignment injected some

levity into our curriculum for students at a time when they needed something that allowed them to take a deep breath and to laugh with one another. Yet it still generated serious, meaningful conversations around the topic of gender roles both in nineteenth-century America and contemporary society. Our use of Hypothesis continues to open doors we might not have considered even last year and is but one way we might consider the Internet to be much than a glowing newspaper.