I am not sure about all of you, but mid-semester is rough for me.  I am exhausted, my students are tired, and I find the Fall semester particularly difficult because of the holiday season. A few years ago, I introduced a movie into my American History survey curriculum to give my students a break from reading, writing, and other classroom activities. So, after midterms are taken and graded, I dedicate a week to watching the 1992 movie, Far and Away. This movie, if you have not seen it, is a tale about two Irish immigrants who leave/flee (it depends on the character), Ireland hoping to “step off the boat” onto “free” farmland.  Recently, Jason Herbert has led a Historians at the Movies #HATM event where historians, students, and anyone who wants to participate live-Tweet as they watch a movie during a scheduled time (usually Sunday evening). #HATM has gained in popularity, which is awesome! I have held my own “historian at the movie” activity for several years, and I can attest, people love historical movies and enjoy learning how to analyze them. 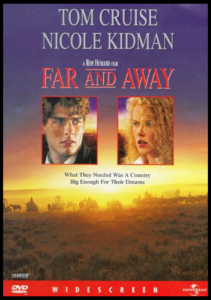 Before I play the movie, I dedicate one week to discussing Reconstruction and the Gilded Age.  With a week of historical context under their belts, my students are prepared to analyze the movie.  What I like the most about Far and Away is it allows me to dive deep into the Gilded Age. The viewing takes two class periods. I pause the movie at different intervals to discuss historical accuracy and to provide perspective.  For example, I stop the film during one of the brothel scenes to explain how Hollywood and the entertainment industry depicts prostitution and how this contributes to the continued objectification of women and rape culture in general.  We then discuss how the nineteenth-century market economy exploited women by paying wages that did not meet their needs.  Low wages meant that many women “treated” or turned to prostitution for additional income.[1]

I also pause the movie when Shannon, the heroine of the movie, engages in a heated exchange with her boss at a chicken processing factory.  Shannon stands up to her boss, and he responds by docking her pay for several days.  I discuss how labor laws pushed by different activists and reformers, including the American Federation of Labor, Progressives, and Populists, are responsible for the workplace and labor standards that we have today. 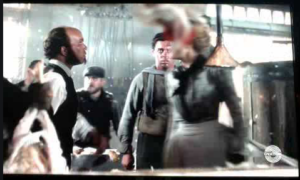 Another scene I like to unpack is one where Joseph (the hero of the story), struts down a Boston street and hears compliments about his new suit and hat.  Shannon refuses to acknowledge his success, and after dumping her in a tub of water, Joseph exclaims, “Tell me you like my hat!” “Tell me you like my suit!” “I have earned them!” “I have done well!”  My class discusses the role that material possessions play in American identity. I also connect this scene to the Revolutionary War era by reminding my students about our previous conversation about homespun clothing and colonial rebellion against British tyranny.[2]

I also stop the movie during the landrace scene to discuss how the Homestead Act of 1862 and the Oklahoma Land Rush of 1893 contributed to Native American removal, the rise of American Indian reservations and to remind the students about our discussion of the Dawes Act. 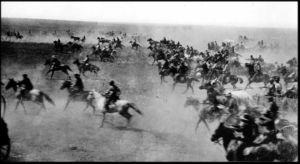 Finally, I discuss the American West as a myth and how the media perpetuates this theme.  I demonstrate the American West as a myth by extending the movie beyond the triumphant final scene.  I talk about the amount of money Joseph and Shannon would need to build a dwelling and begin to plow, and we discuss the demographics of the West and how land rushes and the Homestead Act privileged Anglo-Americans above all others.  Finally, I wrap up the discussion by referencing the Dust Bowl and how intensive farming practices of the Oklahoma settlers contributed to one of the biggest human-made natural disasters.  We discuss drought, and how over-farming exacerbated drought-like conditions and what this meant for the Oklahoma farmers who most Americans remember as examples of the independence and opportunity that western lands offered nineteenth-century Americans.[3]

For the past couple of years, I have also dedicated time during the movie to meet with each student individually to discuss their progress in the class.  I teach at an open-enrollment institution and the majority of my students work full time, have a family, or face some type of obstacle that prevents them from staying on campus for long. Their rushed lives mean that they are unable to attend office hours (yes, I define office hours in class and on my syllabus). Spending time during class to meet with each student allows me a mid-semester check-in so I can help them to get on or stay on track.

The farther we get from the 1990s, the fewer of my students who have watched Far and Away, which makes this activity so. much. fun. You might wonder if I get tired of showing the movie? I don’t!  I enjoy watching my class react to each scene. They come alive during this movie!  Devices are forgotten, no one sleeps, and most of the students are on the edge of their seats.  They laugh, applaud, and there is some eye-rolling. The movie is an engaging mid-semester reprieve for all of us as my students learn how to evaluate the historical accuracy of a movie while enjoying a fun and engaging story. Not a semester has gone by when at least one student tells me that I have “ruined” movies for h/im/them because they now they analyze everything they watch.  Success!

[2]For more information see, Laurel Thatcher Ulrich, The Age of Homespun: Objects and Stories in the Creation of an American Myth(Vintage, 2002).